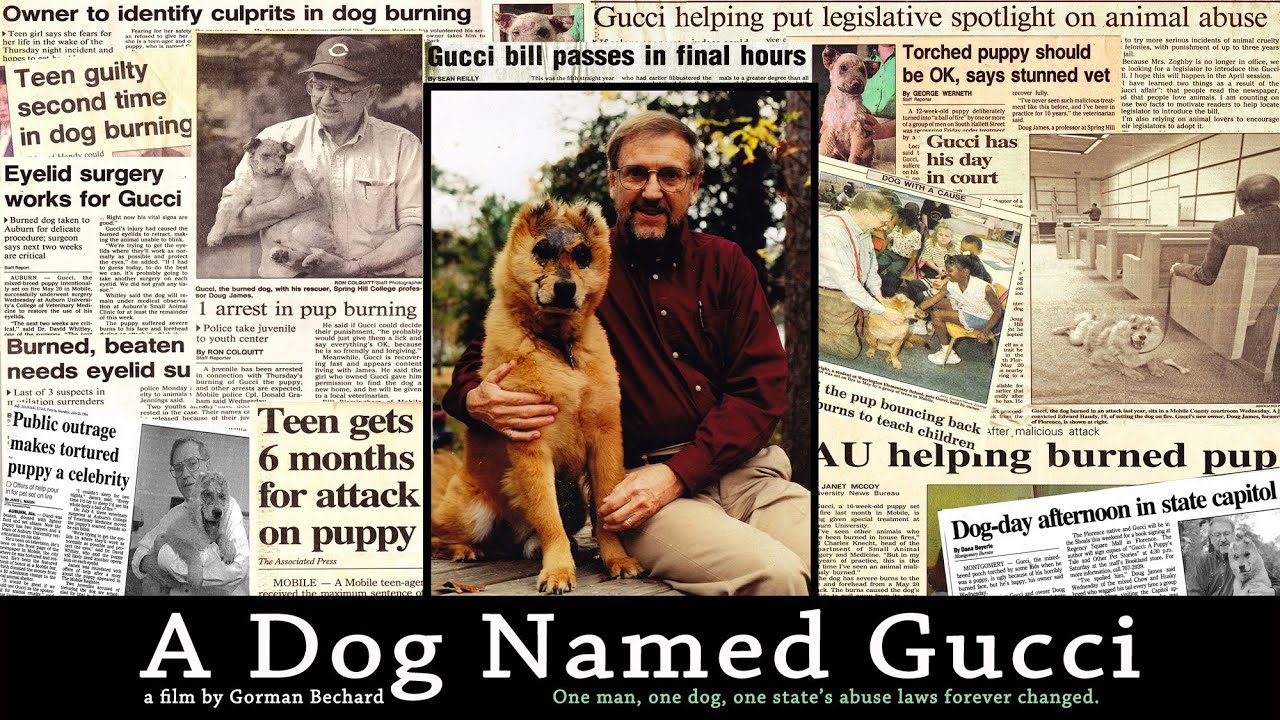 This film, A Dog Named Gucci, the story of a dog who had been set on fire and the man who rescued him, has just been made available on VOD, and follows their  amazing story and mission to end animal abuse.

A Dog Named Gucci details how college professor Doug James jumped into action, saving ten-week-old Gucci, and forging a forever bond of devotion and perseverance. Together they worked to change the non-existent animal cruelty laws in their home state, proving that justice is a dog’s best friend.

“Instead of assaulting the viewer with images of abused animals, we chose to tell what is ultimately an uplifting story of one victim who went on to become a hero,” explains director Gorman Bechard.  “This is a triumphant tale. Gucci began his life as an underdog, but was a fighter and emerged a rock star.”

The film also spotlights three other dogs who, with their owners, have made an incredible impact on the laws protecting animals: Susie from North Carolina, who has that state’s felony abuse law named in her honor; Louis Vuitton from Alabama, the first dog to test the Gucci Law; and Nitro from Queens, New York whose ultimate sacrifice in an Ohio kennel led to the state’s first felony animal abuse laws.

“The film grew out of the love for our own rescue dogs,” adds Bechard.  “It’s a highly emotional film.  People have great love for dogs but many don’t realize the extent of animal cruelty in the United States.  With the amazing platform that documentary film gives us, we can raise awareness and help more animals in need.” A portion of the film’s sales will go to benefit animal welfare organizations.

The closing credits song from the film was a featured release on Record Store Day in April.  One Voice, brings the talents of Norah Jones, Aimee Mann, Neko Case, Susanna Hoffs, Lydia Loveless and Queen’s Brian May together to help spark a movement that encourages us all to be the voice for animals.

Bechard, who was honored with the 2015 ASPCA® Media Excellence Award for his work on A Dog Named Gucci, raised  the film’s entire production budget through grassroots-backed crowdsourcing.  The film was recently released on DVD, and is available for purchase through iTunes, Google Play, and Amazon.com.

For more info please visit: https://www.facebook.com/ADogNamedGucci or contact us using the information provided below: