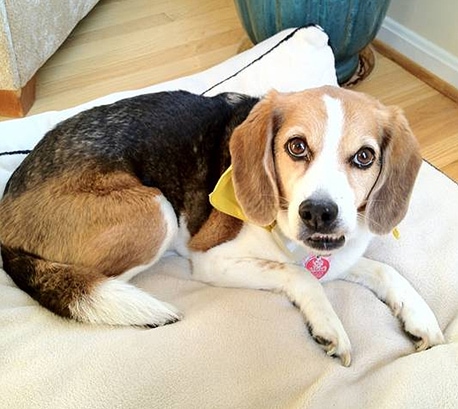 I woke up around 8. I had had one of the worst sleeps of my life. I knew the news about my dog the night before. I stayed up late next to my dog at night in my bed like I had been doing for 11 years. There’s something about sleeping with your dog that gives you a sense of comfort, that your guardian dog snuggled up next to you will protect you against all intruders. The worst part was trying to fall asleep, knowing that this would be the last night with my dog. But I did eventually fall asleep.

I don’t remember what I dreamt but I imagine that it was of all the great times with my dog. Back when my family was together in the good days. My brother, mother, father and I were still a family at the time. As soon as we got our dog, we became a family that everyone thought of. The family in the commercials, mother and father still together, all having fun with their puppy.

And that’s how it was for us. We would go to camping spots with my dog, hiking, driving, walking. Anything we’ve done, it’s been with my dog. My memory simply can’t stretch back so far in which it reaches a point where I didn’t have my dog. All my memories are at a point where I had my dog. Then my family split up, parents divorced, my brother and I would fight. But Wonderdog was there to help me.

I call my dog Wonderdog because of all the sickness he fought. He was to the point where we almost put him down. But Wonder Beagle would always hop up and fight. But I knew he wouldn’t hop to it this time and I knew he was in pain. We had to do it soon to put him out of his misery. But I wouldn’t dream of the bad times, just the good times.

I was the first one up that morning. My dog was right next to me, guarding me for eternity. I just sat there with him. Laid with him for about an hour. Then my dad and my brother woke up. My grandmother had spent the night, too, so she woke up as well. I picked up my dog and brought him downstairs to the living room, or as some call it, the family room. But for us at that point, it was neither. It couldn’t be a living room if something was dying and it definitely wasn’t a family room. My mom wasn’t there. She didn’t even live there.

But we reminisced as if it was, remembering once again the great times. Then, before I realized, we were loading my dog into the back of the van. But this was not my dog…my dog was happy, energetic and loving. This dog couldn’t even walk. In the car on the way there I realized something, though. He wasn’t sad or depressed. He was happy. He knew what was going to happen and yet he still looked ecstatic, smiling and licking us both. He was ready to go, and we were ready to let him go.

As soon as we pulled up to the ASPCA, we met my mom there. I didn’t realize that in the next five minutes I was going to have to make one of the hardest decisions of my life. But I managed. I was ready to let my dog, best friend of 11 years, part of the family, go. My family joined together in a sense of agreement that this was the right decision, which was met by sorrow. A few minutes later, the vet came out and told us he went peaceful, smiling all the way and not putting up a fight.

The ride home was terrible, however. My dog, or what used to be him, was in the back of the van, wrapped in blankets. I couldn’t bear to see him. I’m glad they didn’t let me see him go, or I wouldn’t have let them do it.

We decided to bury him just next to my yard, past a line of trees in a large field. He had always tried to get out of his electric fence to chase rabbits. So I thought, let him. We buried him in the corner of the field, then laid a few flowers over top it. Then a sense of relief came over me. I knew he was in a better place, chasing the bunnies.

Dogs are not just Man’s Best Friend. They are more. Like family they love you and take care of you and protect you. And you treat him just the same. A dog waits by the doors and windows to greet you once you get home. A dog is a stress, sorrow, pain and sadness reliever. A dog makes you feel happy when you’re sad. Unlike humans, dogs are always there for you. Even if they could speak they would ask for nothing in return but love.

There is a certain bond between dog and man, a certain relationship. One that two people could never share. That is why dogs are used in hospitals. They always put a smile on anybody’s face.

All dogs go to heaven, which in a way is unfortunate that such a wonderful dog could not be reincarnated for another worthy being. But I’ll always remember my amazing dog. And I’ll remember him not for the day when he left us. But all the great times. Except he didn’t leave us. I know that when he’s not chasing bunnies or playing fetch, he’s watching over us. And I know he will every step of the way, just like he used to.