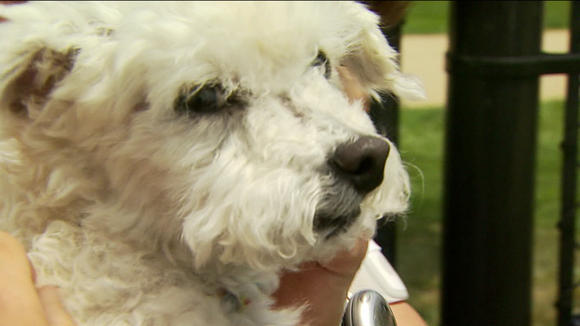 With all the tragic stories we bring you about puppy mills and abused dogs, it is gratifying to know that there are happy endings for many of these animals, despite their wretched beginnings. Henry is one of those dogs.

Back in January, the Heartland Animal Rescue took Henry in after he had been rescued from a puppy mill. Having been confined in small crates, the miniature poodle and other dogs were covered in sores and bruises.

He was just in terrible shape, just awful, one of the worst we’ve ever seen,” said volunteer Linda Candler. “Big open sores … his feet were so infected.”

Because of the severity of his condition, Henry visited the vet three times a week for six months. Despite his wounds, Henry started visiting a school in South Bend, Indiana as part of a reading program. Teacher Julie Toth said he just stole her heart.

“Henry is like having a puppy even though he’s between three and four years old,” Toth said. “He’s never experienced most things other dogs have experienced, so he plays.”

She says that by seeing Henry’s wounds, she is reminded how crucial it is to help others.

“We need to care for each other, and this was the perfect opportunity to show my son that’s what we are there for,” Toth explained.

She adopted Henry, and says it was the best decision she’s made in a long time.

“He is a really, really good dog and a good companion.”