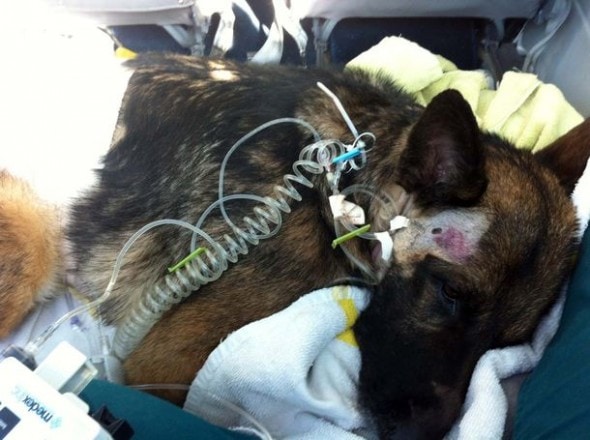 A few days ago the story of Drake was told; how he protected his home against burglars and was shot and seriously wounded.  The five year old german shepherd  seemed to be on the road to recovery and had the support of many friends and veterinarians, but sadly he took a turn for the worse and was euthanized on Friday evening.   Drake was a retired police dog, best friend to his owner, Florida State Patrolman Bobby Boody, and was simply the victim of a terrible crime.

Following the shooting, Drake had surgery to repair his leg, his jaw, and a large unrelated tumor from his abdomen, and was showing signs of improvement that were very encouraging. However the bullet that entered his neck severed one of the small arteries that feed [blood to] that part of the esophagus.  Unfortunately for Drake and Boody, nothing could be done to replace the blood supply or the dead tissue.

Drake had been flown to Gainesville on Friday morning where some of the best veterinary specialists in the state performed a series of tests.  “We found a large piece of his esophagus deep in his chest that was rotting,” Dr. Ken Simmons said. “It was clearly a devastating injury.  It was really frustrating too because everything else was coming along really well.”

The 16 year old suspect that was arrested on Wednesday morning has been charged with armed burglary and felony cruelty to animals. Apparently he was already on probation for burglary and grand theft, records showed.  Two more suspects are still at large.

“At the end of it, we didn’t leave any stones unturned, we didn’t put Drake through any pain. He didn’t feel any pain at all,” said Simmons.  Drake will be remembered as a wonderful companion, courageous partner, and hero.