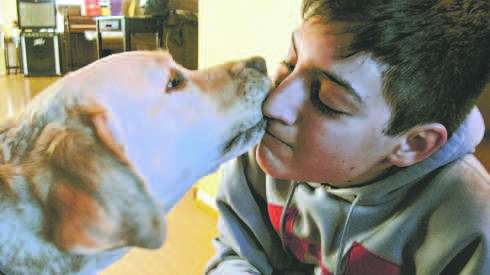 Christian Poorten was having a nap, which doesn’t seem like a dangerous activity, but if his dog Quail hadn’t woken him up, he might have died.  Poorten has Type 1 Diabetes and Quail is a Diabetic Alert Dog trained to detect and alert the boy when his blood sugar is low.  That day, Poorten had played a lot of basketball and while he was napping his blood sugar dropped to 25 milligrams per deciliter, a dangerously low level.

His mother Terri, along with Robyn Abels, executive director of Power Paws Assistance Dogs are certain that Christian’s life was saved when Quail pressed the button on the floor near Christain’s bed with her paw sounding a doorbell like alarm.  Knowing her son was tired Terri said  “When she pressed it, I thought, ‘I hope she’s right.'”  Well, one thing is sure, no one will ever doubt Quail instincts again.

When she went to Christian’s room she found him shaking and sweating, and immediately gave him orange juice, after which he gradually recovered.  In addition to sounding the alarm, Quail, an english labrador retriever, is trained to bring Christian his meter, a box of orange juice and to sit up whenever she senses he has low blood sugar.  She went to school with him every day in eighth grade and he says “I love her like she’s another human, probably like a sister.”

Power Paws has placed 10 Diabetic Alert Dogs and they have been nearly 100 percent accurate, even though it is unknown what chemical they detect with their noses.  They must test at an accuracy of at least 80% before they can be placed, which is about the same accuracy as a meter, and they can pick up the low-blood-sugar reading about 20 minutes before a meter.

Power Paws dogs cost $22,000 because the the dogs require 2 years of training.  Families pay $6000 and the rest is covered by donations to the non profit organization.   Power Paws was founded in 2001 and has placed 73 dogs in total , with the other dogs helping people with mobility and hearing impairments, and more importantly allowing people to live more independent lives with a lot less fear.