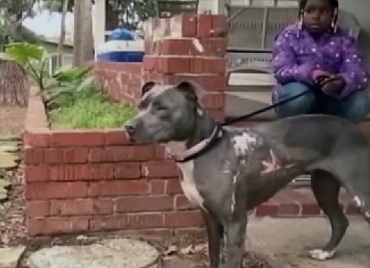 Diamond is a girl’s best friend, but because of breed profiling, the hero dog and her family are struggling to find a home.

The hero pit bull saved her family last October by rousing them as a fire ripped through their apartment while they slept. Diamond’s owner was able to get his youngest daughter out of the apartment, but his 16-year-old daughter became trapped by the fire.

Diamond was with her, and when firefighters found them, Diamond was laying on top of the girl to shield her from the fire while flames scorched the dog, refusing to leave her position despite the pain it was causing her, burning and blistering her body so badly that she was hospitalized for six weeks afterward. The LA SPCA later presented Diamond with their 29th Annual National Hero Dog award in recognition of her bravery.

Now, in an ironic and troubling twist, the family is struggling to find new housing. In the following report, Diamond’s owner tells George Lewis that landlords won’t rent to him – because of the very dog who saved his family.

43 thoughts on “A Hero Without a Home”