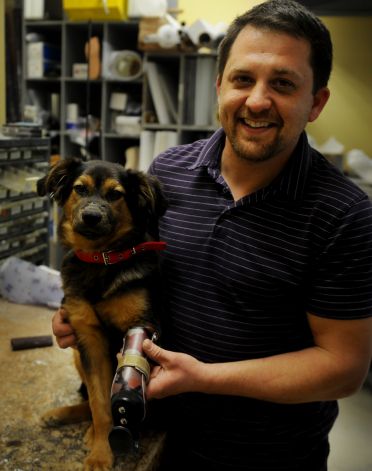 A few months ago life was looking rather bleak for Bandit, having been abandoned in the back woods of Kentucky and then losing a foot in coyote attack.  Luckily for him he was taken in by Sweet Adoptables, and life suddenly took a turn for the better.

Sweet Adoptables is a pet adoption agency in Westport that specializes in finding homes for strays from the Southern U.S.  When Bandit arrived it was not long before they realized that missing about 2 inches from one of his front legs was going to cause him bigger problems down the road.  “He can get around OK, indoors, but when he runs around outdoors, the fear is that he’ll damage his leg to the point that he’ll need a full front leg amputation,” said Jeff Rubelmann, a technician at BioMetrics, a company in Trumbull Connecticut that makes artificial limbs and braces.

When Rubelmann met Bandit he decided to adopt the sweet 1 year old mutt and give him a better life.  Even though BioMetrics had never made a prosthesis for a dog he set to work to create one for Bandit.  Rubelmann followed the same procedure that he would if he was making a prosthesis for a human, starting with a plaster cast of the dog’s leg.  The result is similar to what they would make for a small child.

“He really can’t tolerate much pressure on that foot when his new foot isn’t strapped on,” he said.  “We know from working with humans how much their quality of life improves with a new limb,” said Robert L. Dzurenda, company president. “Because when you deviate from the normal gait, it throws off a lot of other things.” 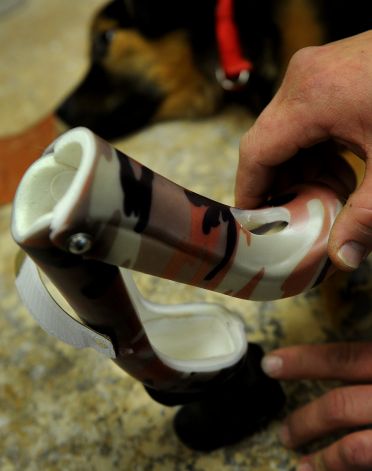 At the moment Bandit still tries to chew on the straps when he is resting on his bed, but when he is outside it is a different story.  “But once he’s running around outdoors, it’s like it’s a part of him,” Rubelmann said.  Dzurenda added “When you fit a prosthesis to a child, it soon becomes almost a part of his life.  So, we’re hoping that Bandit will take to his leg, too.”

Whatever happens, Bandit will have a wonderful and happy life with Rubelmann and partly thanks to him the industry of creating prosthetics for dogs, which is currently very limited will continue to see growth which will eventually make them more affordable.  “The technology will come if there’s enough people willing to spend money on it, and more money gets behind it,” said Dr. Thomas A. Milos of the Shakespeare Veterinary Hospital.