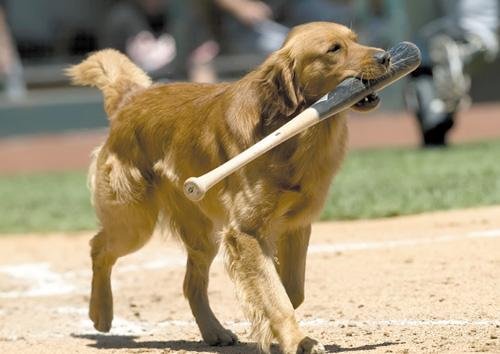 Jake’s real name is Deuce, and he is Jeff Marchal’s fourth golden retriever that has been wowing baseball crowds. It all started twenty-five years ago with Marchal’s golden retriever Jericho. Then living in Florida Marchal and Jericho caught the attention of people when Jericho would go to the nearby store with a basket of money and return with a six-pack of beer. Jericho’s tricks and likability soon got him a gig with the Minnesota Twins affiliate the Fort Myers Miracle.

Jericho passed in 1994 and the original Jake took over. After the original Jake there was Homer and Deuce took over in 2009 as the most current “Jake the Diamond Dog.” Marchal has trained his golden retriever to do numerous tricks. He acts a batboy retrieving the bats during the game, brings water to the umpires between innings and giving the game ball to the pitcher. The crowd loves Jake. “Nothing away from the other batboys, but we love Jake,” said spectator Melinda Brandt.

Marchal is committed to quality and has not accepted a check when his dog hasn’t performed well. “The majority of the time, he does great,” said Marchal though. Sometimes Jake struggles with some of his tricks but that only entertains the crowd more. “Sometimes it’s funnier when he doesn’t do something he’s supposed to do,” said Mark Galuska, director of Marketing for the Clippers. “That’s when the fans seem to get a bigger kick out of it.” Jake has about 30 games on his schedule for this season and Marchal plans to keep going with this gig as long as he can.