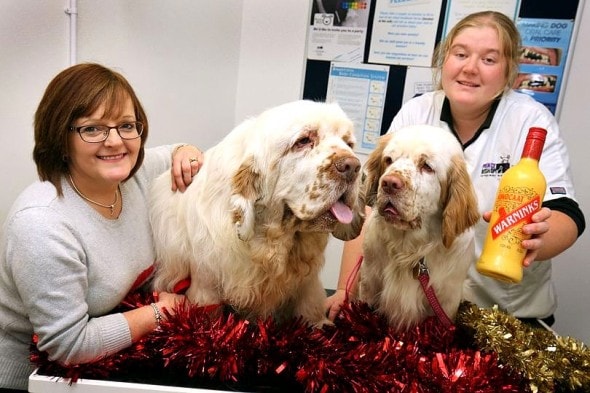 As everyone is treating themselves and celebrating this season, it’s worth remembering to keep the (holiday) spirits well away from the pets.  A couple of dogs in the UK broke a bottle of Advocaat, a Dutch eggnog, and slurped up the contents.  Though most dogs will likely survive getting a bit tipsy, too much can be just as dangerous as it is for people.  Fortunately these two were ok!

Fiona Robson was recently shocked to arrive home and find that her Clumber Spaniels, Martha and Oscar, had gotten themselves day drunk (and without her – hmph)!  She had been keeping a bottle of sauce on a bench in her utility room, but when one of the dogs knocked it over, selfless creatures that they are, the two decided to clean up so mom wouldn’t have a mess to come home to.

When Fiona saw the glass shards and no liquid she was initially more concerned that they might have injured their mouths on the sharp bits, but it soon became apparent that they weren’t lacerated – they were loaded!

While Cocker Spaniel Brecon, suspected to have been the vandal, opted to stay sober, Oscar and Martha quickly got themselves knackered on the rich liqueur, which can range from 14 to 20 percent in alcohol content. 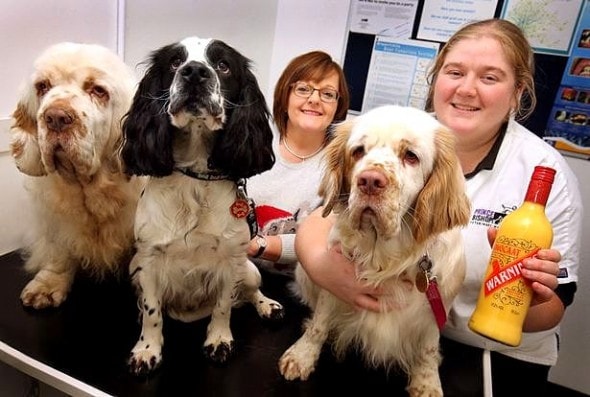 Not knowing how serious their conditions might have been, Fiona carted all three off to Prince Bishop Veterinary Hospital in Consett, where they were treated by Dr. Emma Hindson.

Poor Martha and Oscar had vomiting induced and were fed activated charcoal to soak up any alcohol that hadn’t already made its way out.  They were sent home the next day in good health, albeit a bit hungover.

Though Fiona was panicking at the moment, upon reflection she wishes she had recorded the two, as seeing them drunk was fairly funny.  But she hopes her experience will serve as a warning to other pet parents.

“Sometimes as owners we think we have everything secured, but it can just take something silly like this to happen,” she explained to The Chronicle.

“Our utility room is normally a safe place to keep our dogs while we’re out. It could have been really serious, but thankfully we’re all fine.  I won’t be keeping bottles on the top of unit anymore, and I would advise pet owners to keep everything locked away.”