Delilah, an 11-year-old dog has been given a second chance at life by a total stranger.  Delilah was facing being put to sleep after being hit by a vehicle.  The medical costs were far outside the realm of possibility for her human, and that all but impossible decision to let her go was the only option.

The vet bill was going to come to $6,000, and Delilah’s human just didn’t have it.  Gus Koucouthakis found Delilah after being hit, and did not want to see someone have to let their dog go.  He decided to pay the bill himself.

Gus made arrangements for the dog to be taken to Fort Wayne, Indiana where the proper medical procedures could take place.

Cari had just undergone knee replacement surgery, which as many will know, is not a cheap thing to have done.  Then, on top of that, she got the news that Delilah was going to have to be put to sleep.  What an awful position to be put in.

Then, along comes a Good Samaritan and turns things around.  Not only will Delilah be saved, but Cari wasn’t going to have to worry about coming up with $6,000 she didn’t have.

On of Delilah’s back legs had to be amputated.  Medical staff also had to put in some metal plates and screws.

Gus said, “She was hurt pretty badly. Just seeing her really broke my heart and I wanted to do everything I could to help her.”

Gus and Cari may have started out perfect strangers, but thanks to Delilah, Gus has some very grateful new friends this holiday season. 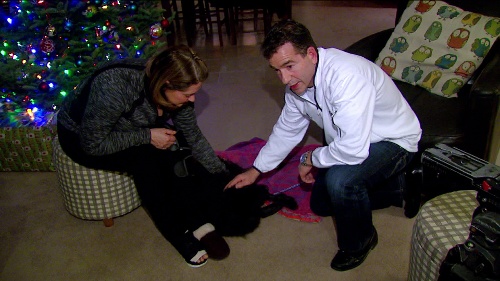