A dog that just couldn’t make it all the way through the Norman, Oklahoma police dog academy finally got his chance after all. Jax assisted the police in apprehending would-be burglar Dustin Lance Powell.

It all began with a high speed car chase.  The cops were chasing down a suspect that went screaming through Norman, sometimes exceeding speeds of 100 miles per hour.  However, when the suspect found himself in Jax’s backyard, he knew he was in trouble.

David Cunningham, Jax’s human, knew something had been going down on his property when he heard someone screaming in his backyard, and Jax going berserk.

Cunningham said, “We hear someone saying ‘don’t shoot, I surrender!’”  Something really big was happening outside, and it seemed like Jax was right in the thick of it.  Cunningham recalled the dog barking and howling like mad.

“He keeps pacing outside the door, going back and forth. But it’s dark, so you can’t really see. But we know someone or something was back there,” Cunningham said. 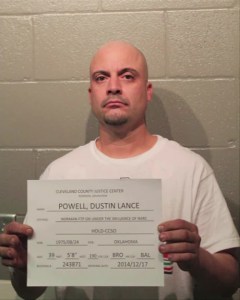 Dustin Lance Powell, 39-years-old, was arrested in the Cunningham’s back yard.  He is now facing a number of charges including possession of a stolen vehicle and endangering the lives of others.

Cunningham told reporters that Jax had some police dog training.  He just never managed to be able to graduate.  Unfortunately, Jax is a bit timid when it comes to extremely loud noises.

“He can handle anything except thunder. When you hear a little bit of thunder, he goes and hides his head, so that’s not going to work in Oklahoma with our thunderstorms, so he can patrol the backyard but not the streets,” said Cunningham.

Cunningham likes to think that even though he isn’t an official police dog, he played his part in the suspect’s apprehension.

“He had been a great dog, he’s protective. When you’ve got kids in the house, it’s nice to know, they’ll tell you, they’re not afraid because Jax won’t let anyone in the door,” said Cunningham. 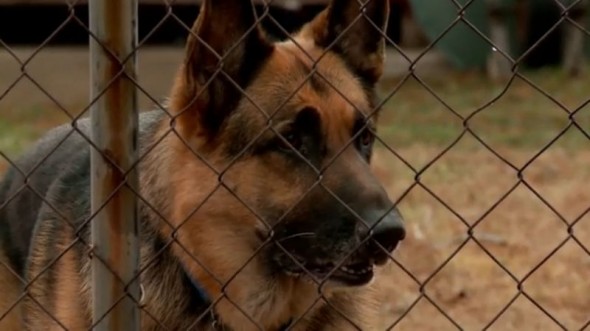