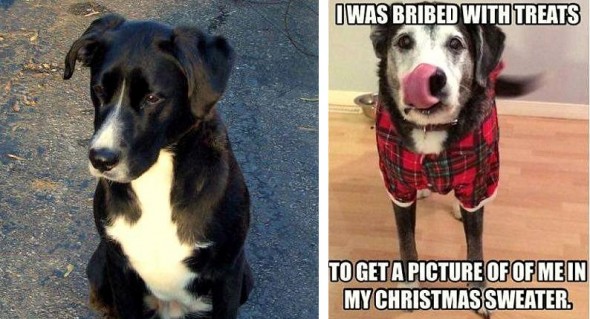 This story comes from Windsor/Essex County Humane Society from a fan who adopted their Buddy from them:

It’s been 10 years almost to the day since we adopted our good friend Buddy. He was named Ralph when we got him at WECHS and even though I wasn’t sure I really wanted a dog at the time, as soon as we met him and brought him home, I fell in love with him and never looked back.

He’s been the best dog you could ever hope for. Sure, he’s deeply affected by the presence of the mailman on our street daily, and he loves to wait patiently for you to leave your food unattended so he can snatch it up, and if he ever gets the opportunity to roll in a dead fish he’s all over it.

But he’s also the most loving, protective, loyal friend you could ever ask for and we are so happy to have had 10 great years with him so far! Since bringing Buddy home in January 2006 we also brought home his human brother and sister, who love him just as much as we do. As you can see by his beginning and later pictures, Buddy has aged beautifully.

So what if his hair is a little grey?  (I blame it on the kids.) He worries about them a lot when they are outside playing without him or when we have to go places without him. Anyway, I just wanted to share with you another story of a loving friend and longtime companion who found his happy forever home.

If you live in the Windsor, Ontario area and would like to give a home to an animal in need, click here to see some of WECHS’ adoptables.