Apple, a Bull Mastiff/Boxer mix, was left one night at the drop box of a shelter in Riverside, California. No one knew whether she was abandoned by her owner or whether a kind stranger took the time to take her off the streets and bring her to the shelter. The staff in Riverside only knew that this sweet natured dog needed help immediately. 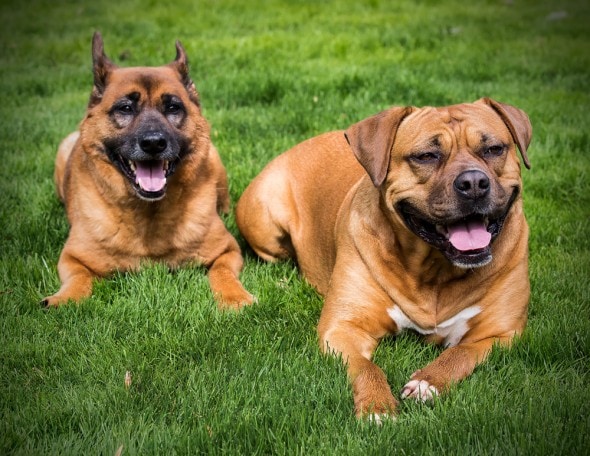 Apple was alone and without much hope when she arrived and you could see it in her eyes. The shelter staff agreed that she seemed depressed and for good reason! She was infested with fleas and ticks and was in the advanced stages of pregnancy, all without the support of a loving family.

To make matters worse, Southern California’s euthanasia rate has skyrocketed in recent years due to a massive spike in the population of abandoned pets and overcrowding in the shelter, making Apple and her pups’ futures even more uncertain. The staff came to love Apple, though, and helped her as she gave birth to nine puppies. They were saddened by the lack of prospects for this gentle, sweet dog and her large litter.

Finally, they contacted START (Shelter Transport Animal Rescue Team), a rescue organization that transports pets out of high kill shelters in California and takes them to other rescue organizations in the Pacific Northwest. They hoped that Apple and her pups could get out of the crowded shelter before it was too late.

START then contacted SafeHaven Humane Society to see if they could take Apple and her litter. Thanks to their dedicated team of foster homes, they were able to save Apple and her pups’ lives! The mother and litter received needed medical care and lots of love until they were ready to be adopted.

Apple is now named Piper and living with a wonderful forever family who love to spoil her. She enjoys playing with her family and her new canine sibling and basking in the sun. Each of her nine puppies was also placed quickly in forever homes.

The puppies are truly lucky to have found people who were concerned enough to see them rescued and, with the help of START, to eventually arrive at the aptly named SafeHaven Humane Society rather than being born on the streets or being euthanized.  Such stories are only possible thanks to the joint efforts of people and organizations working together to rescue pets like Apple and her puppies.

SafeHaven Humane Society is a 501(c)3 no-kill rescue organization located in Albany, Oregon, dedicated to finding permanent, loving homes for all animals entrusted in their care and to helping the community’s residents to be the best “humane” beings they can be. They do this by providing: compassionate temporary shelter care resulting in healthy and adoptable animals; information; education and understanding; and spay and neuter programs. They are committed to not using euthanasia to control population and allow a pet to stay with them for however long it takes to find them a forever home.

START (Shelter Transport Animal Rescue Team) is a 501(c)3 non-profit organization founded in May 2011 by a group of active and concerned animal lovers. START was formed to address the overpopulation problems and prevent the thousands of pets euthanized yearly in Southern California. They do this by providing transportation from high kill shelters in Central and Southern California to rescue organizations in the Northwest, where they are re-homed, and by providing free spay/neuter clinics in local communities.