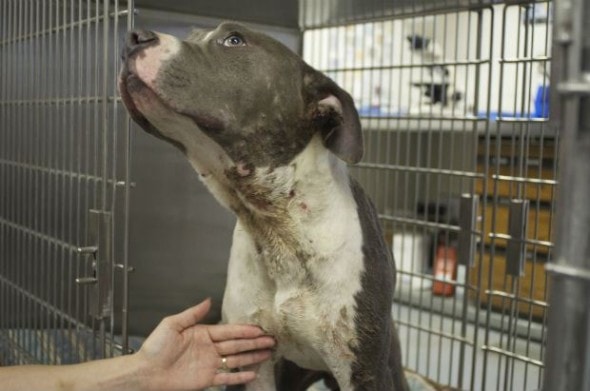 A Good Samaritan came to the rescue of a severely injured do that officials believe was used as a bait dog. The dog arrived at the Humane Society of Indianapolis with hundreds of puncture wounds and underwent emergency surgery. He is now on the road to recovery.

A man named Gene found the dog, which has been named Triton, wandering in his neighborhood. The dog was covered in wounds and his legs were swollen. Gene brought the dog to the Humane Society of Indianapolis where staff was taken aback by his condition.

“It was shocking. He had huge gashes on his forearms,” said Christine Jeschke with the Humane Society of Indianapolis. “On the front of his legs you could see puncture wounds everywhere.”

Some of the puncture wounds were obviously older than others as they were all in different stages of healing. They shaved Triton’s fur to find even more wounds on his body. Triton didn’t have any wounds on his face which was an indication that he had been used as a bait dog.

“Dogs used as bait for dog fighting practice are often muzzled or their mouths are bound with duct tape so they can’t defend themselves and injure the prize dog,” said Jeschke.

Triton will stay at the Humane Society of Indianapolis while he recovers from his various injuries. They are not sure when he will be available for adoption as he will have emotional injuries to recover from as well.

If you wish to help with Triton’s care donations can be made at IndyHumane.org