One very cold day in February, a beautiful German Shepherd was found abandoned, lying in a ditch by a cornfield. A volunteer from Wayside Waifs, a Kansas City animal rescue organization, happened upon Hope. The volunteer, Lisa Pickard described her first encounter with Hope:

“She was down in the ditch and she was clearly injured. She was shaking. She was breathing hard. So we put her in a blanket and put her up into my car and took her straight to Wayside Waifs.”

What Lisa didn’t know was that Hope had been shot! For what reason someone would have harmed the sweet girl, no one could guess. However, she had been shot in the left femur, missing vital organs but doing enough damage that her leg would require amputation.

Hope would need to live out the rest of her life with three legs, but at least it would be a life rather than dying in a ditch. Thankfully, her surgery went very well and she even tried to walk on her three legs almost immediately afterwards.

It took some time for the staff at Wayside Waifs to build trust, but after enough hot dogs (which she loves) and lots of love, Hope began to recover both physically and emotionally.

It was very soon after she had recovered enough for adoption that her forever friend found her. Justin Rangel had seen Hope’s picture and fell in love with her immediately. He did not know she only had three legs at first, though. This did not deter him, though, but rather made him want her even more! He adopted her soon after and his life has never been the same.

“When I’m not with her, I miss her a lot. I didn’t think that was going to happen…She has really helped me get out of my comfort zone. She is definitely a really good friend.” 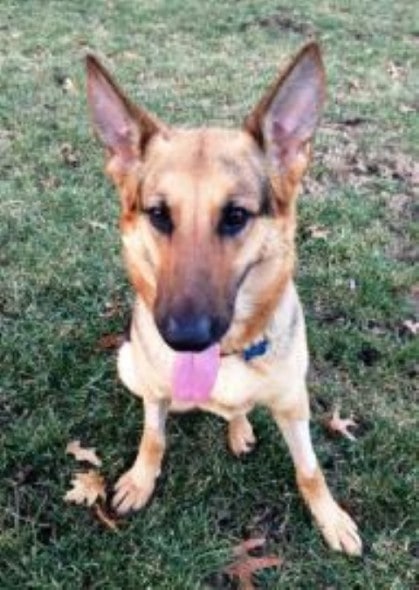 I am sure that many of us can relate to Justin regarding the unexpected effect that our furry companions can have on us! Hope is now happy and safe with Justin and living the life she was meant to have and that someone cruelly tried to take from her.

Wayside Waifs is a non-profit shelter in Kansas City, Missouri that is dedicated to finding homes for all pets. Wayside is the largest no kill pet adoption campus in Kansas City, placing approximately 5,400 animals each year. Wayside does not euthanize adoptable animals, and there are no time limits for animals in their care. Only animals suffering from such significant medical issues that they cannot be saved or those that pose a danger to others and themselves are humanely euthanized.