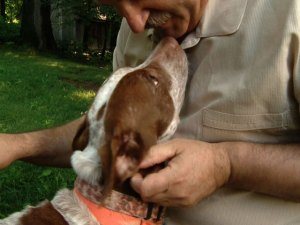 Chuck Weintraub has been rescuing dogs for years. Last week one of his foster dogs returned the favor when she saved his life.

On July 3rd Weintraub was mowing his lawn when he suffered a heart attack and collapsed. He lay unconscious in his backyard with no one around to help. Then Cloe, a foster dog he took in about a month ago, came to his aid.

Cloe ran to a neighbor to get help, even though she was scared and never liked to leave his side. Cloe, a pit bull mix, was surrendered to the Western Pennsylvania Humane Society and Weintraub began fostering her in May. She had sores on her body and was not socialized. During her time with Weintraub she rarely left his side.

The Brock family, who are neighbors of Weintraub, heard Cloe barking at them. Michael Brock tried to Cloe but she backed up when he tried to get close.

“She reared away from me and went probably 15 feet,” said Michael Brock. “I actually advanced towards her and she ran across the road and sat down again. And she actually did that three or four times until she actually brought me up to this spot.”

Another neighbor, Charleen Deneen, heard to commotion and came to help. Deneen is a registered nurse and began performing CPR on Weintraub. Without Cloe, Weintraub would not have gotten the help he needed in time.

Weintraub, and his neighbors, are all amazed by Cloe’s efforts.

“She was traumatized when they gave her to me. For her to leave the yard, to go to my neighbor’s house, to bring them back to me is stunning,” said Weintraub.

Weintraub is doing better now, equipped with a pacemaker He will continue to foster Cloe and plans to only give her up to the right family.