A Stray Hero from Hisyam on Vimeo. 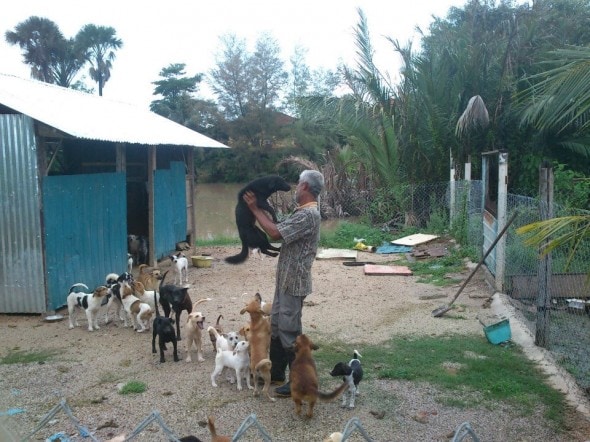 Mohammad Azmi lives in a country where dogs are considered taboo, filthy and un-Islamic.  Azmi sees dogs in a different way, and his amazing story is being told in a short documentary called “A Stray Hero”.

Azmi, who is fondly known as Pak Mie, and his wife live in Malaysia, a country that doesn’t see the value of dogs. “They are usually looked down by the Malay-Muslim community, but little do they know that dogs are the closest friend a man can get,” said Pak Mie. For twenty years he has been helping the stray animals in Malaysia. To date Pak Mie and his wife have rescued more than 600 strays.

Their love for the animals they save is unconditional. They spend their savings to help these dogs and often go without so the animals can get what they need. “No matter how much money we have…we would spend it on them, not ourselves,” said Pak Mie.

They couple has pawned all of the wife’s jewelry to help feed the stray dogs.  They sleep in a car parked outside the shelter to make sure no one harms the animals at night. For them the sacrifice of a normal life is worth it to save these special animals. “The most special animal in this world are dogs, and we can’t find it in any other animal,” said Pak Mie.

Despite their generosity and good deeds towards all the animals they have saved, many in the Malay Muslim community look down on them and criticize them for caring for these animals. Pak Mie and his wife know they will never get anything in return, but they plan to continue their work until they die.

For more information on Pak Mie and his work visit his Facebook page (managed by his son) and a blog about his shelter.