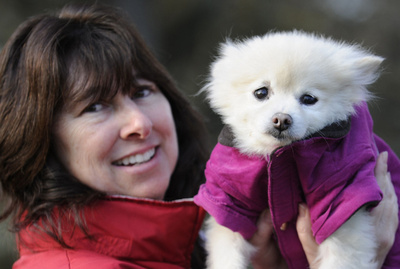 A tiny dog with matted fur and only 2 teeth was left overnight at the Waterloo Humane society was not a prime candidate for adoption, especially after it was discovered that she had cancer.  But the bright eyed and spirited 10 year old Pomeranian won the hearts of everyone she met and is now living in a wonderful forever home.

Things were not looking promising for the dog named Wanda, whose 2 remaining teeth were rotten and who had to shaved to remove the matted fur.  Then things looked even worse when vets spayed her and discovered that she had cancer in her uterus.  The uterus was removed but when she was put up for adoption she came with a “buyer beware” tag.

In spite of the neglect she suffered as well as the cancer, this little dog was unstoppable.  She would run around excitedly, wagging her tail and smiling with her tongue hanging out of her mouth.  The humane society saw happy little spark plug and dubbed her “a special case” saying “this little fighter has not given up.”

Janet Spencer is a volunteer at the Humane Society, but she didn’t know about little Wanda until she saw a video on the Facebook page.   She went to see Jenny Maciel, the humane society’s dog co-ordinator and they went to Wanda’s kennel together.  “I walked over to the kennel and lightly tapped. She looked up,” Spencer said.  “She jumped out of her little bed and she was wagging her tail. She came right up to the door.”

That was all the encouragement Spencer needed.  “I said, ‘Jenny, wrap her up. She’s coming home. That’s my Christmas present,’ ” she recalled.  Spencer and her husband don’t care about the cancer, or Wanda’s age.  They know they will love and enjoy every moment they have together.  “There was just something about her. It’s those eyes,” Spencer said.  “You don’t know how long they’re going to last. We could still have her for five years or … for less time. It’s a chance that you take.  I figure, you know, even if they’ve only got six months, give them all the love and attention you have.”

Wanda has settled in beautifully at the Spencer’s home, getting along well with their 2 other big dogs and the cats, and piling happily into bed with her new parents at night.  Says Spencer, “I will cry when (Wanda’s) gone. But this way, when she passes, she’s not going to be by herself.”