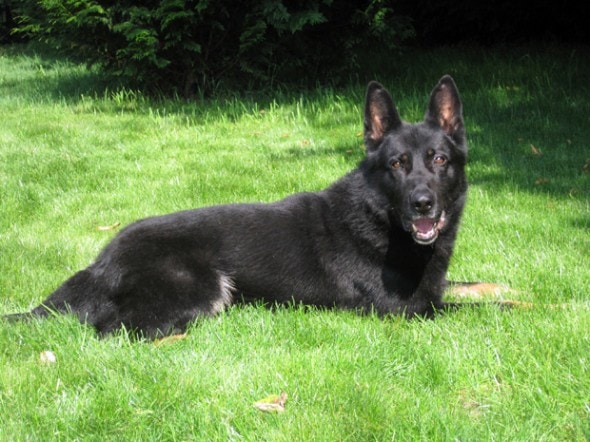 A celebrated police dog passed away suddenly on Monday, leaving his partner and handler Const. Michael Jordan devastated.  The 9 year old dog named Cargo had been with Jordan since he completed his training in 2006, and has guarded the Prime Minister, sniffed for explosives, patrolled major world summits and was hailed as a hero when he tracked down an elderly woman with Alzheimer’s earlier this year

With Cargo just one month away from retirement, he and Jordan went for their regular after work run, but Cargo was clearly not feeling well and so they went straight to the vet.  It was discovered that Cargo had cancer which spread throughout his body, and he passed away that night.   An RCMP press release said “Police service dogs love their work. Cargo worked right up until the end without any hesitation and with no previous signs of illness. He’s been a great companion and partner as we have done a lot together and he will be greatly missed.”

One of Cargo’s best accomplishments came earlier this year when he managed to track down an elderly woman with Alzheimer’s who had been missing for over 2 hours.  He found her in less than 30 minutes.  In addition, with  his partner Jordan, Cargo worked on the investigation into the EnCana pipeline bombings in Dawson Creek, he tracked down and caught a thief who killed a person while driving a stolen vehicle; caught several bank robbers; and brought a taxi cab robber to justice.

Also a part of the Mountie’s breeding program he sired over 20 litters in the past 6 years, leaving a legacy and large paws to fill and will leave a large hole in the heart of Constable Jordan.  Says Sgt. Rick Chaulk, of the Lower Mainland RCMP Integrated Police Dog Service, referring to the special bond between a dog and his handler,  “He is your friend, your partner, your defender, your dog.  You are his life, his love, his leader. He will be yours, faithful and true, to the last beat of his heart. You owe it to him to be worthy of such devotion.”
.