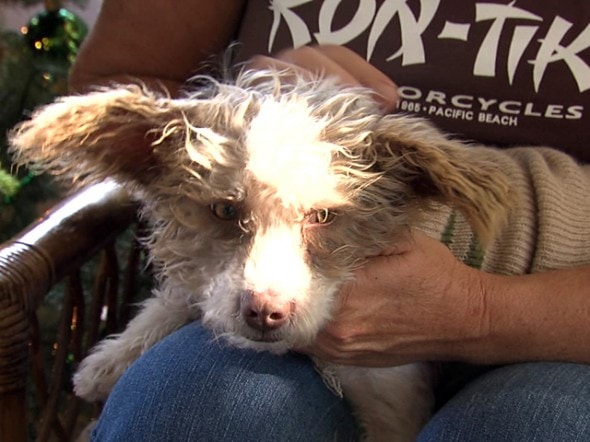 Burnie was mysteriously dropped off at the Chula Vista Animal Care facility right before Thanksgiving. He was found covered with angry red sores and veterinarians believe he was burned by either a chemical or a hot liquid. In the past month he has made an amazingly speedy recovery and has now found a new loving home and family.

Burnie, a terrier mix, was only about six-months-old when he was abandoned at the shelter in bad shape.  His recovery has been remarkable to those treating him. “He’s doing great,” said veterinarian Juli Maher. “He’s healed so fast. He healed amazingly fast. We’re all shocked.”

Just as shocking is Burnie’s emotional recovery. “We haven’t seen any type of fearfulness or anything because of the trauma he went through,” said adoption counselor Linda Septon. Burnie is constantly wagging his tail and loves people, other dogs and even cats.

Now Burnie has a new family to love and love him back. Deborah Anderson first saw Burnie on the news and fell in love instantly. “I just wanted him to have a home where he was safe and wouldn’t have to worry about anything like that again,” she said.

Burnie will now be spending his time with Anderson, her family and her other dog Clyde, who Burnie has already become close to. “He and Clyde just clicked right away and just played really hard,” said Anderson. “We went to take them apart and he didn’t want to split up.” Anderson is now focusing on making sure Burnie feels loved and safe in his new forever home.