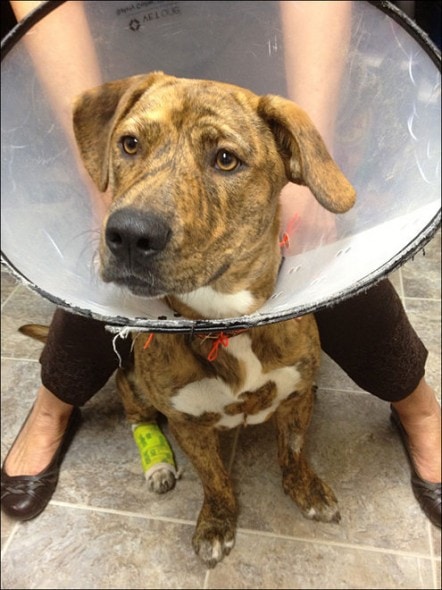 A pit bull named Buddy was abandoned at an Oregon grocery store after a do-it-yourself neutering job went wrong.  He was found leashed to a shopping cart with a bag of dog food in it and a sign that read “Anything helps.”

Springfield, Oregon resident Jan Durham discovered the badly bleeding dog and rushed him to an animal hospital.  She paid for his life-saving surgery out of her own pocket.

She says she feels no anger toward the person who left Buddy.

“I thought that they were just trying to do something on the cheap and trying to save money,” Durham said.  “And, I don’t know what their circumstances were.  At least they loved him enough to leave him in such a public place.”

Buddy’s botched neutering was serious enough to threaten his life. 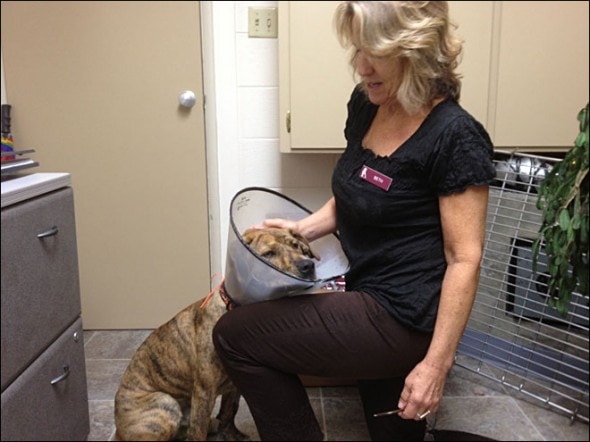 “They tried to slice the skin open in the scrotal sack to remove the testicle and apparently, when our client brought him in, things were hanging out,” said Q Street Animal Hospital manager Beth Mitchell.  “He was bloody and it was painful.”

Buddy is now recovering in Durham’s foster home.  She has another dog and unfortunately cannot keep him, but will hold on to him while he recuperates.  Luv-a-Bull, a local pit bull rescue organization, will be handling his adoption when he is ready.  Liesl Hardt, a spokeswoman for the organization, has said that Buddy is smart, sweet and good with kids.