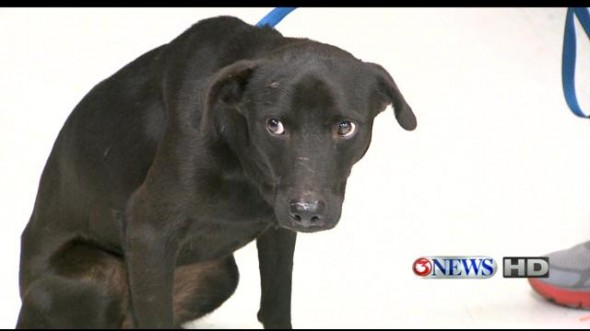 The one-year-old Labrador mix, affectionately called Loyal, has found himself a home.  The canine good Samaritan earned his moniker when his companion was struck by a car as the pair was running along a street in Corpus Christi, Texas.  He pulled the injured dog to the side of the road, and fiercely guarded his body after he died.

Loyal stayed by his deceased friend for days.  Volunteers tried to capture him, and though he was not aggressive, he would not budge.  They left food and water for the dog who kept constant vigil.

“Once you walked away, he’d maybe eat a little bit, but you had to put it right next to his friend or he wouldn’t leave,” said Julie Perry, a volunteer for People Assisting Animal Control.

After four days, they were finally able to capture Loyal.  But there was a problem – the animal shelters were full.  If they didn’t find a

home for him soon, he would be euthanized.

“We don’t want the dog to be euthanized, so we are hoping that someone will step up and take the dog, and PAAC will be willing to pay the fee,” said Cheryl Martinez, president of PAAC.

Bettye Avery was happy to provide Loyal with a home, and went to the Animal Control offices on Tuesday to do so.  She says she has a Lhasa Apso named Cindy who will be glad to have a new brother.

9 thoughts on “Loyal, the Dog Who Dragged his Friend From the Road, Finds a Forever Home”