After three long, sad years on the run, a lost dog named Dolly has a new home.

Calera, Alabama animal control officer Chris Smith finally caught Dolly at the intersection of U.S. 31 and Alabama 25 after a lengthy and exhaustive pursuit. 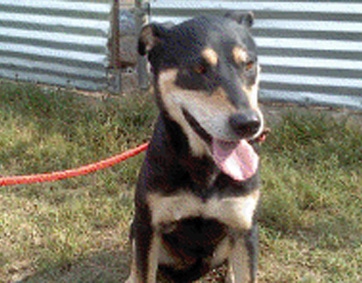 The tan, mixed-breed dog is well known for wandering Calera’s Waterford subdivision and Kensington Manor apartments. “It felt good to be able to get her off the street and get her to a good home,” Smith said. The good home he is referring to? His own. After hearing her heartbreaking history, Smith and his wife Carla said they wanted to know she was home for good.

According to Smith, Dolly’s previous owners lived in the Waterford subdivision. When faced with foreclosure, the owners moved out and abandoned Dolly. “A neighbor said that for three years she came back every week to the yard where she had been left,” Carla Smith said. “She just knew in her heart they would return for her.”

They never did, and the devoted, heartbroken dog recently left the Waterford area, wandering through Calera, where Smith eventually found her. Because of the sadness she’s endured, Smith says she will only know love and safety in her new home.

“We will never leave her,” Carla Smith said. “She is family.”

Dolly is being treated for a number of ailments at Calera Animal Hospital. She is malnourished and riddled with parasites after spending so much time uncared for, but is expected to recover fully.