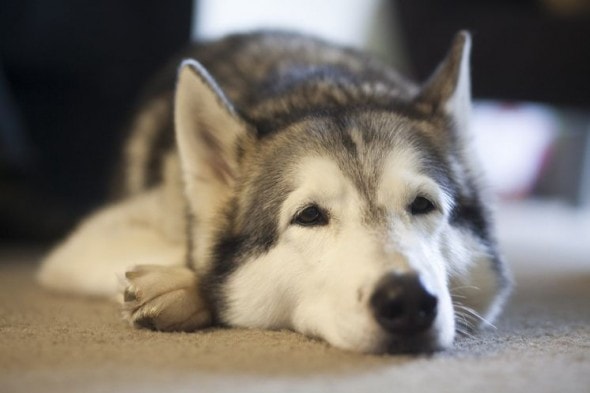 Waleah was surrendered by her owners to the Miami-Dade Animal Shelter with a suspicious mass. Her chances of not being put down weren’t looking good as she was owner-surrendered at an overcrowded shelter. Then Dawn Bauer of Husky Haven of Florida stepped in and refused to give up on her.

When Bauer heard about Waleah she knew Waleah’s time was running out if she didn’t get to her soon. “We knew we had to get there quickly because when these shelters become overcrowded, owner-surrendered dogs are among the first to be put down,” she said. “They know no one is looking for them.” Bauer saved Waleah from being put down but Waleah wasn’t out of danger yet. She had a tumor that Bauer said was “the size of a NERF football.”

Luckily for Waleah, Bauer was prepared to fight for her. “Waleah’s owners may have given up on her, but I wasn’t about to do the same,” said Bauer. A biopsy of Waleah’s tumor revealed that it was breast cancer. The first step was surgically removing Waleah’s tumor. Bauer raised money and was able to afford the $700 surgery. After surgery Waleah would need $1,500 for chemotherapy. So Bauer contacted the Magic Bullet Fund, a non-profit in New York that helps pay for dogs to receive cancer treatment.

So far enough money has been raised for Waleah to start her chemotherapy and her veterinarian is optimistic about Waleah’s treatment. “The only negative prognostic indicator was the size of the tumor; we don’t like to see them that big,” said Dr. Jen Coyle, who is overseeing Waleah’s treatment. “But with chemotherapy, we’re hoping to stop or slow any remaining microscopic disease.”

Waleah still needs several hundred dollars to help cover her treatment, if you would like to help you can go to the Magic Bullet Funds website to make a donation. In addition you can donate to other dogs that are also fighting cancer and need help.