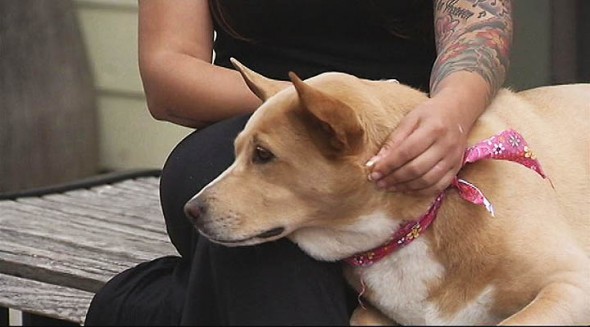 A very scared dog, appearing to have just been dumped in downtown Benicia, California with the words “free” and “I need a home” written on her fur in what appeared to be permanent marker has been found.  Thanks to Shannon Bettencourt, this dog is now resting comfortably and safely with her, in her new forever home.

“It’s hard to imagine what somebody was thinking when they did that,” Shannon said.  “The first thing I thought was to call the police but then I was like no, they’re just going to call animal control.  I didn’t know what could happen from there.  I was like no way, I’ll at least keep her for the night.”

So taking the whimpering dog away from the tree next to the Chinese restaurant it had been dumped at, Shannon brought her home, and the bond was almost instant.  After being together for a very short time, it was decided that right there with Shannon is where the dog belonged.

“Somebody just kind of treated her like trash but she ended up being my treasure,” said Shannon.

Libby, which is short for Liberty, the dog’s full name, is what Shannon calls her new best friend.  Shannon can’t for the life of her figure out why someone would want to just dump Libby like that.  She seems to be very friendly and well natured, and is even housebroken.

No matter what the reasons someone had for doing this to her, Shannon is very happy to have Libby in her life.

“It was actually kind of a blessing in disguise, even though it was very sad to start with,” said Shannon.