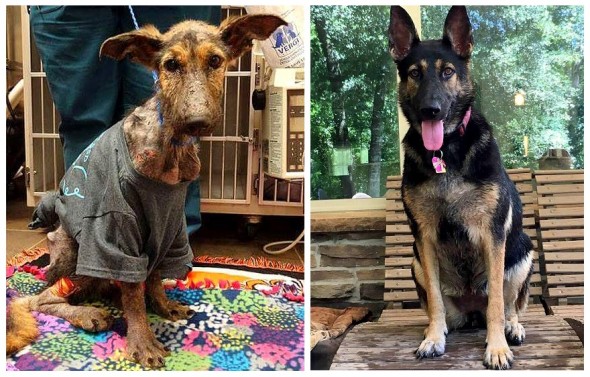 When I came across a before-and-after photo of Frannie in a comment thread, I knew I had to find out more about her.  So Eric Holliday, one of her rescuers, sent me the full story… 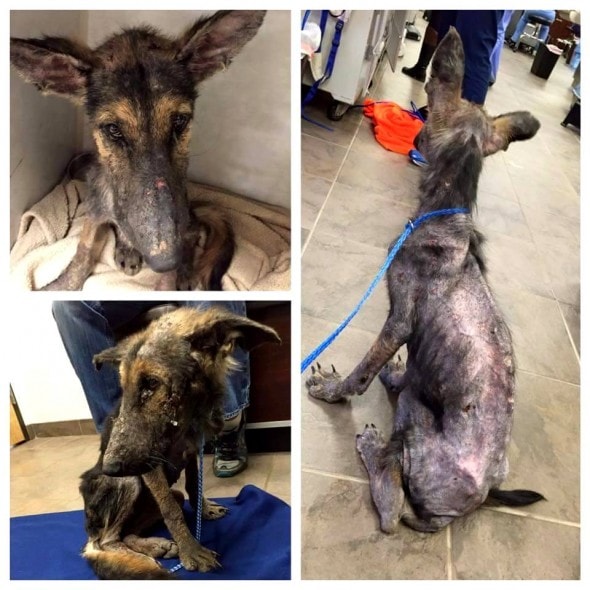 St. Francis (Frannie) was first reported to our group – Val’s Pals GSD and Large Paw Rescue –  via another rescue named Forgotten Dogs of 5th Ward (in Houston). They are a group who has volunteers go into the 5th Ward area and feed the enormous number of homeless dogs. We were alerted to her on the evening of Wednesday, December 16th. The person who saw her noticed her eating on the carcass of another dead animal. 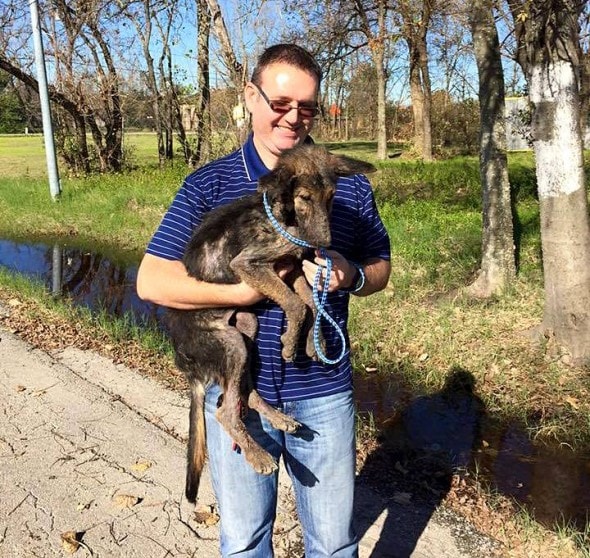 Sam Arkey [and myself] went out to the last reported siting area on the morning of December 17th. We walked up and down the streets trying to find her when we had all but given up and began walking back to our cars. Sam finally spotted her curled up seeking shelter in a pile of brush. She was barely visible and I commented to Sam, “that’s not a dog, it’s just some branches,” but it was her. 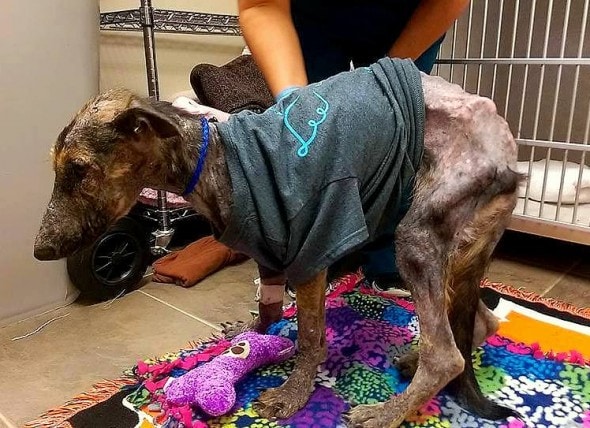 We made our way over to her.  Normally you approach a stray with caution, but it was clear she had all but given up. She wasn’t going anywhere and posed no risk to us. The poor girl was barely holding on. We placed a leash around her, tried to coax her up and out, but she didn’t move much, leaving me to pick her up and carry her. I still remember pulling a leaf off her cheek and blood began to drip. It had turned cold that day with freezing temperatures expected, and we have no doubt had she not been found that day, she would not have made it through the night. 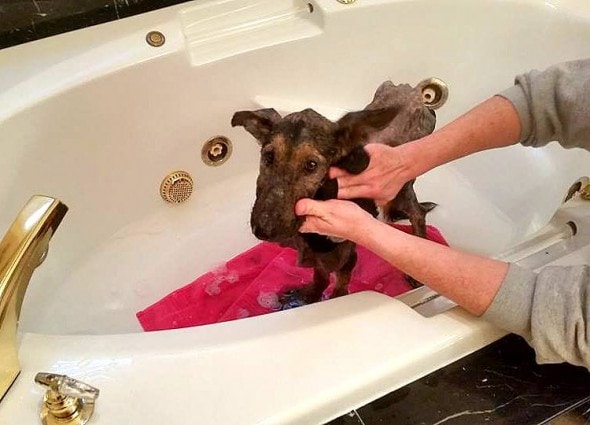 We immediately took her to Vergi 24/7 in Houston, an outstanding ER veterinary clinic. Our group focuses on medical cases and Vergi is who we trust with all our cases. She was immediately evaluated. Weighing barely 23 pounds, she was first estimated to be between 6-9 months old, but that estimate was later revised to between 2 and 3 years old. At the 2-3 range, she should have been in the 70-pound range. Her condition was critical, emaciated worse than any of us or the staff had ever witnessed. 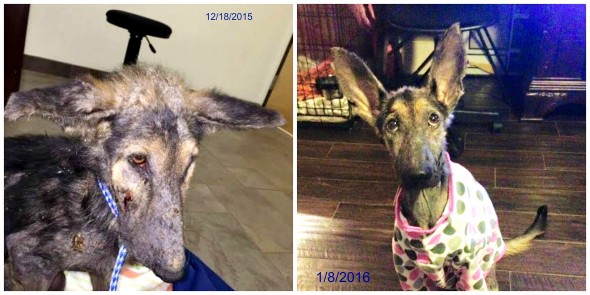 The biggest health concern was from the starvation and avoiding re-feeding syndrome. She was also anemic and required frequent blood draws to keep close tabs on her electrolytes, blood glucose, and protein as vitamins and minerals were reintroduced to her system. She was placed on IV fluids and fed very small meals every two hours. We expected her to remain under ICU care for weeks. There were ups and downs along the way. At one point, the staff at Vergi didn’t think she was going to make it. Our group scheduled a prayer vigil and candle lighting for the evening of Dec 22nd. They were clearly answered because made a miraculous turnaround. 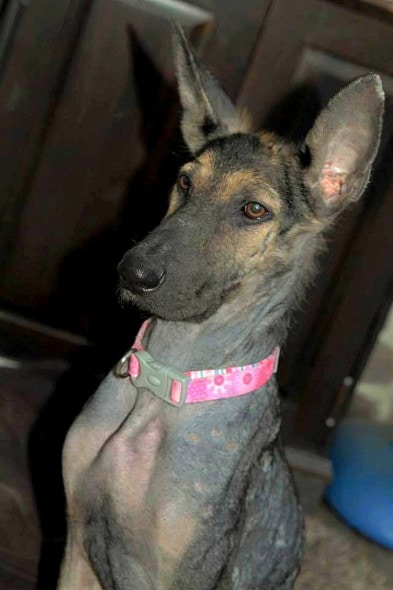 She went into her first medical foster home on December 23rd. She spent a week in the care of Jill Washburn. Jill needed to keep a close eye on Frannie and feed her small meals every four hours. She also needed to take her to the vet every couple of days for blood draws. Still keeping close tabs on electrolytes, blood glucose, and protein. When we were able to feed larger meals every six hours, she was moved into a longer term medical foster home with Amy Boram Wilson. Amy continued the care and frequent trips to the vet’s office for checkups. Amy and Jill gave Frannie all the love and care she never knew before. They are the real heroes in Frannie’s tail. Without fosters who take in these dogs and offer them love, compassion, and care, no rescue group like ours could save a single animal. 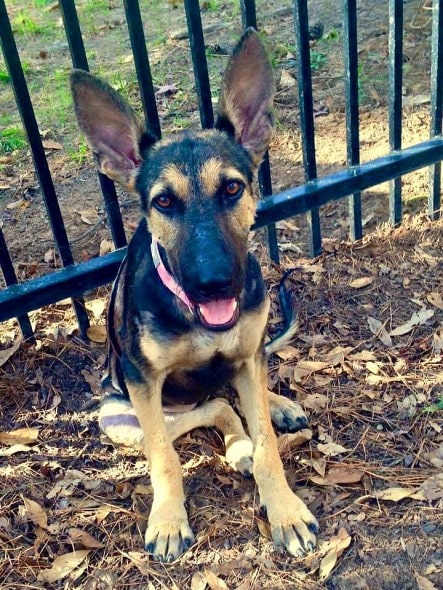 Frannie was adopted into her furever home on February, 27th by Jack and Jan Long. We typically require three meetings between the dog and prospective family. Amy told us upon the first meeting that Jack and Jan were a perfect match for Frannie. They have proven to be that and so much more. Jack says her life on the streets still has an effect on her today. She’s leery of new things until they reassure her things are ok and she’s a very opportunistic eater. She is a little energizer bunny – she will run and play all day. 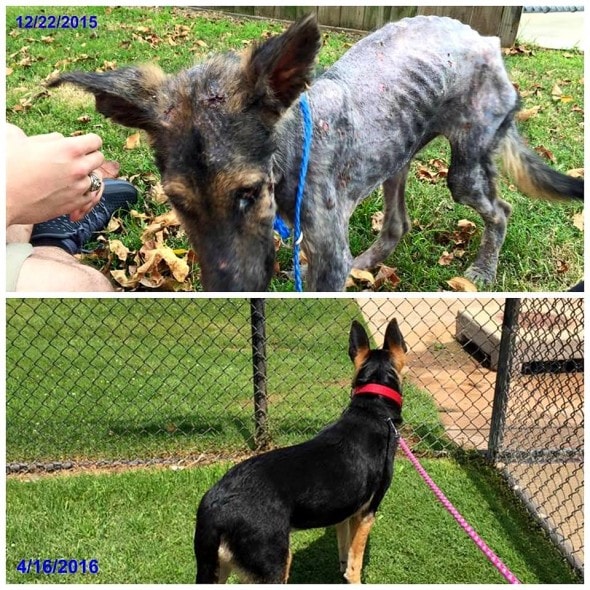 They recently adopted another rescue dog.  Frannie now has the mom and dad she never had and a brother. Her life is perfect. It is hard to believe seeing her today and knowing it’s barely 7 months since she was a mere skeleton on death’s door. St. Francis, her namesake, certainly looked after her. The 5th Ward area is a slum area known to be a dumping ground for dogs no longer wanted. Frannie was likely one of these dogs. We will never know who was responsible for her condition, but we know the many who came to her aid and offered her a hand. 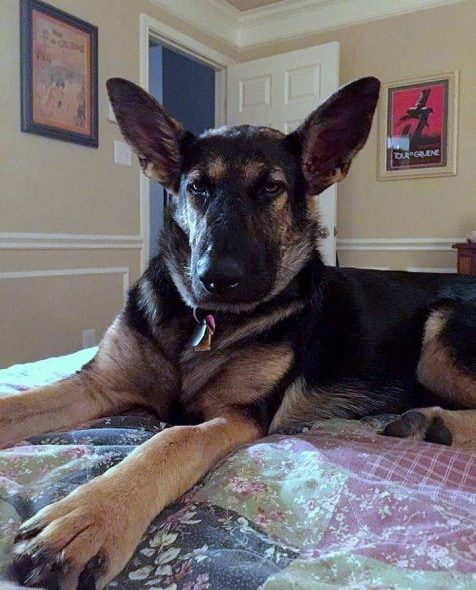 If you would like to make sure that Val’s Pals GSD and Large Paw Rescue is able to continue saving the lives of desperate dogs like Frannie, please CLICK HERE to donate.