A female mix-breed dog, believed to be six-years-old was found wandering along Highway 97 C near the Okanagan Connector in British Columbia, Canada, on May 24, 2015. A couple found the dog, took her to their apartment and posted a plea on Facebook for help. Thanks to the Good Samaritans, the dog is alive and well today, but she is searching for her owners.

The Good Samaritans were camping at Kentucky Alleyne campground and saw the dog with another group of campers, but later spotted the dog all alone walking along Highway 97 C. 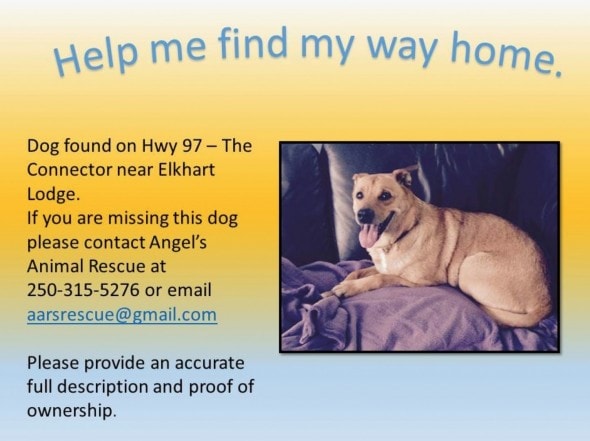 Rescuers believed the dog was purposely dumped in the campgrounds since the area is known as an animal dumping ground. However, the animal loving couple saved the pet from being run over by a car on the highway.

The dog was examined by a vet who found her in good condition. No microchip or ID tags were found on her. Angel’s Animal Rescue is hoping someone would recognize the dog or know who she belongs to. Anyone with information can help the rescue group understand why such a sweet dog ended up alone (lost or dumped) along the highway.