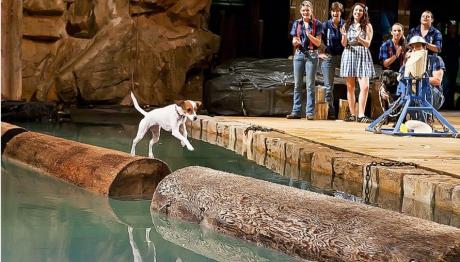 When Richard and Teresa Kusmierczyk first brought Daisy home with them they weren’t even sure the dog would make it. She had been abandoned in the woods with two of her siblings. When the puppies were rescued they were malnourished, dehydrated and needed desperately to be nursed back to health. With the Kusmierczyks’ help Daisy has made an incredible recovery.

When the Kusmierczyks brought the little Jack Russell Terrier home she was in bad shape. “She was listless and unresponsive,” said Teresa Kusmierczyk. “She weighed nine pounds when we found her.” The Kusmierczyks slowly nursed Daisy back to health in within the first month she had already put on five pounds. Slowly her energy level came back and soon the Kusmierczyks had a lovable, happy dog. They had no idea though the impact she would have on their lives.

Teresa Kusmierczyk had been thinking of getting a service dog to help her since she is confined to wheelchair. With Daisy now healthy they decided to start training her. Trainers told Teresa that terriers don’t make good service dogs, but she believed Daisy could do it. About a year ago Daisy began her training. Now She helps Teresa out every day, picking things up when Teresa drops them. “She is very attentive,” said Teresa.

Daisy continued to impress and amaze when last month the Kusmierczyks met the animal trainer at the Great Smoky Mountain Lumberjack Feud. Spurlock thought Daisy might excel at dock diving, so he asked the Kusmierczyks to try her out in the pool. Daisy wasn’t too thrilled with water but Spurlock found an event that she excelled at, the boom run. In the boom run dogs run along logs in the water and Daisy immediately excelled at it.

On Thursday night Daisy performed the boom run in front of thousands of cheering fans at the Great Smoky Lumberjack Feud. She captivated the crowd and had many fans coming up to meet her afterwards. . It’s a long way from when she first came into the Kusmierczyks’ lives and Daisy isn’t done yet. Spurlock thinks she could also excel at dock diving too.