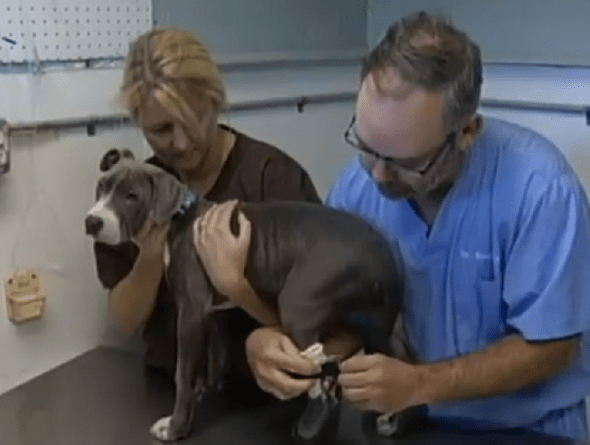 Hudson is one of three pit bull puppies that were found  abused and abandoned on railroad tracks in Albany, New York back in September. On Monday, he received a new leg that will help him get around and makes him finally ready for adoption.

The three pit bull puppies were only three-weeks old when they were found abandoned on the railroad tracks. They were malnourished and had serious injuries. Hudson’s back left paw had been severed completely. The two other dogs were found with serious wounds to their paws as well. One of the puppies did not survive, but Hudson and his sister Pearl have been recovering at the Mohawk Hudson Humane Society.

Monday was a big day for Hudson. His new prosthetic leg had finally arrived. The Mohawk Hudson Humane Society was able to pay for the prosthetic thanks to an outpouring of donations. Hudson is adjusting to his new leg quickly. The injury he had sustained had made it difficult to keep up with his sister Pearl. As soon as his new leg was fitted Hudson was quickly up and playing with Pearl. “I can’t believe it,” said veterinarian Dr. Tom Bowersox. “He’s walking on it, he’s sitting on it. I guess what amazes me most is that he hasn’t chewed on it yet.” The prosthesis is adjustable, but Hudson will need at least two more prosthesis as he grows.

Now that Hudson has been fitted with his new paw the two puppies are ready to be adopted. There has been an overwhelming interest to adopt them. The Humane Society has asked for short essays from potential adopters explaining why they’d like to adopt the puppies. The Humane Society will select the best essays and then meet with those prospective owners to find the right fit for Hudson and Pearl. They hope to have the puppies in their new homes by Christmas.

Authorities are still investigating the abuse and abandonment of the three pit bulls. A $7,000 reward is being offered for any information leading to an arrest and conviction.