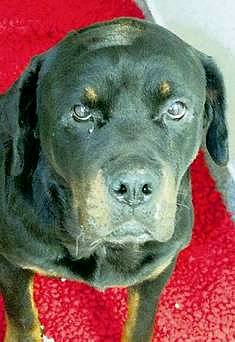 Thanks to an anonymous tip to police, Kim the Rottweiler is on the mend after spending an agonizing three days in a Belfast manhole. With temperatures reaching fatal highs in the UK area, it’s down to the astonishing will to live that this dog has survived.

The poor girl, left for dead inside an eight-foot manhole, is believed to have been attacked with bricks and sustained a number of cuts to her head.

After being pulled from the sewer by police, she was rushed to Vets Now Ltd., where she underwent emergency surgery. Senior nurse Diane Young calls Kim the “loveliest dog – an angel.”

“She could have died without a doubt. She had potentially been down the hole for three days during the heatwave,” Young said. “When the police brought her to the clinic she was very underweight, around 1.5 stone (21 pounds, or 11 kilograms) and severely dehydrated. The nurses treated her and the vet examined her. She was very thirsty and very hungry and the first port of call was to get her into a kennel and give her a feed, which she devoured. She also drank four bowls of water back to back.”

Young was deeply concerned and upset by Kim’s appearance.

“I was very shocked at how underweight she was. It was particularly upsetting because she has such a beautiful nature; the wee tail never stops wagging,” she said. “We’ve been treating her since Friday night with lots of high-end nutrition and antibiotics and she has put on 3.5 kilos (about 8 pounds) since Friday night.” 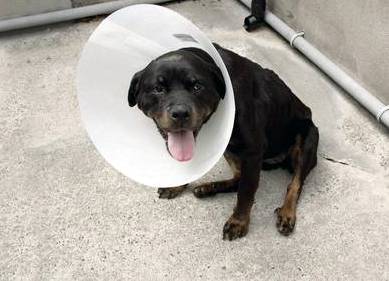 Kim had surgery to treat a uterine infection and was spayed. She is now recovering at Earlswood Veterinary Hospital, with her care overseen by senior partner Ian Millar.

“It’s a miracle that the dog was retrieved from a manhole, especially after three days. She could easily have been ignored or bypassed by the public, so whoever discovered her did a great thing and since the operation she’s recovering very nicely,” Millar said. “She’ll get her stitches out in a week from now following her operation but the very fact that she was able to go through surgery and come out the other end bodes well for the future.”

It will take about three months for Kim to be fully recovered and at the proper weight for her breed, but she’s doing well.

“She’s a dog with a good spirit, a dog who’s optimistic, you might say, about life and she should do all right,” Millar said.