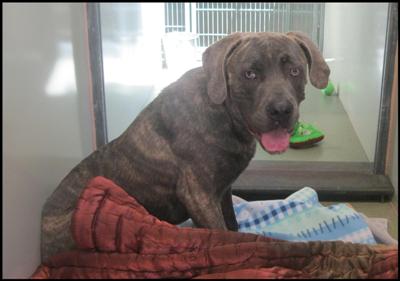 Wyatt, a Mastiff-mix puppy, was rescued in August, found tied to a tree and missing his right rear paw. He was brought to the Cleveland Animal Protective League where they have been working to get him a prosthetic leg. After a failed attempt at a prosthesis in August, Wyatt finally has a leg that fits.

Due to Wyatt’s size, amputating the rest of his leg was not ideal because it would put too much strain on his other legs. With only three legs he would tire easily in a simple game of fetch. He also still tries to walk on the remaining portion of the leg, giving him a substantial limp and causing his stub that lacks a paw pad to get open sores. Wyatt was an ideal candidate for a prosthetic. As people heard of Wyatt’s story, donations came pouring in to help get him his prosthetic leg. A Denver, Colorado company that works on animal prosthetic technology began working on a leg for Wyatt.

A prosthetic leg was first tested out on Wyatt in September. It was a bit too long and needed a few angles changed. Finally this past week a new shorter leg was tried out and it seems to be a good fit. “They adjusted it and took about three inches off, so significantly different from last time with the length and he’s much more comfortable,” said Cleveland Animal Protective League’s Head of Veterinary Services Dr. Allison Lash.

Wyatt still needs time to get used to his new leg though, “After about five or 10 minutes, he got pretty tired. So, he’s officially taking his leg home with him today and his foster mom is going to be working on keeping it on for literally just a few minutes, maybe 15 minutes a day for a week,” Lash said. Wyatt has been staying with a foster family as he goes through the process of getting his prosthetic leg and getting adjusted to it. It will take him some time to retrain his muscles to get used to walking with his new leg.