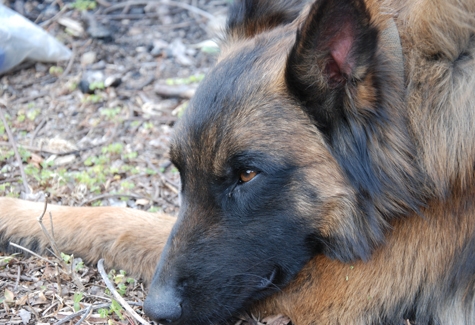 Thanks to Pinkerton, a Belgian Malinois, and his trained nose, a hard to find group of endangered monkeys and gibbons are now able to be tracked and studied by scientists.

The endangered primates, the black-crested gibbon and the Phayre’s leaf monkey, are very elusive and hard to find in the remote Chinese mountain range where they live. “The major challenge of working with these primates isn’t only that they are reclusive, few and quick moving, but that they live in steep mountainside forests littered with cliffs, which has made them especially hard to find and difficult to study for previous researchers,” said Joseph Orkin, a graduate student of anthropology who is studying the primates for his doctoral dissertation.

Orkin decided to use Pinkerton as a research assistant after finding other studies of elusive species had used scat-sniffing dogs to track and find data. Orkin contacted an organization the trains dogs to sniff out bombs, weapons and drugs for the Chinese police. Orkin worked with a dog trainer from the Kunming Police Dog Training base in China. Together they trained Pinkerton to hunt through mountain underbrush and signal when he locates the feces of the primates. When Pinkerton finds the scat from the specific species, he lays down by it and wags his tail. He is then rewarded with a tennis ball.

Orkin is able to use Pinkerton’s finding along with DNA analysis and other tools to identify individual monkeys and gibbons and figure out their movements and breeding habits. This data could in turn help preserve these endangered animals.