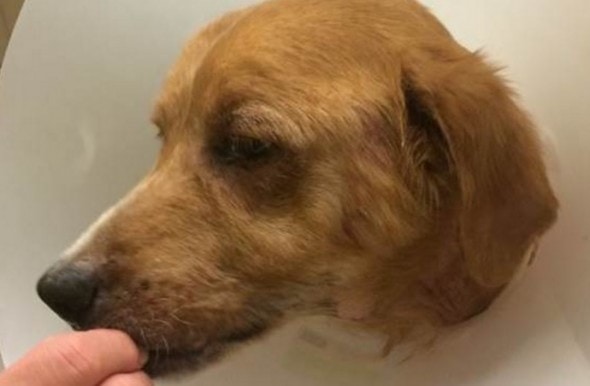 Trooper was found abused and abandoned by JoAnne Gerri.  Found about 100 yards from the entrance to Forest Rim, in the state of Washington.  After being taken to a local animal hospital, she was given two options to save Trooper, neither exactly an easy one.  She could, as they put it, “Put him in the system,” and hope for the best, or bear the financial burden herself.  Please, if you can, help Trooper get back on the road to recovery.

To see the YouCaring.com page set up for him, click here.

If you’re reading this you are likely familiar with the story of the abused, starving, infected stray JoAnne Gerri found about 100 yards from the entrance to Forest Rim yesterday, the dog was taken to Alpine Animal Hospital across the street from Costco.
The people there were wonderful – while they were doing the initial examination, they walked us through our options in terms of either putting him “in the system “ or assuming financial responsibility and potentially becoming his owners (after we meet the legal requirement to put forth a good faith effort to find his original owners). We chose option B, and Dr. Pierce, the vet at Alpine gave us a preliminary evaluation. She said that she thought he was a young dog, between 2 and 4 years old, because he had great teeth. She said that although it was early, having only done an initial examination, she thought that the dog could make a nearly full recovery. Dr. Pierce also gave us an upper limit estimate of $2400 for the care that they were going to provide. We agreed to that and after leaving a $400 down payment, they admitted the brave little guy.
They bathed TROOPER – who was named by a neighbor’s son during our check in process at Alpine. Good job, it is a perfect name. They shaved him, did full-body x-rays, took samples, put him on IV antibiotics and pain killers, put a wet-on-dry patch on the wound on his shoulder-which the vet thinks is the result of being in a cage so small that he couldn’t stand up for weeks or months. Dr. Pierce also said it was possible that he had been laying in his own waste and that could have been a contributing cause to the massive infection that he’s got in his left arm, and the problems with his skin.
We left him in the very good and caring hands of the folks at Alpine, went home emotionally exhausted and had a stiff drink.
This morning, we called Alpine at about 9 o’clock, and discovered that Trooper had a good night. He had eaten, he was more hydrated, had become very friendly with the folks at Alpine and had even wagged his tail! we spoke with Dr. Pierce and found out the following:

And the kicker? He will be ready for us to bring him home tomorrow afternoon!! Our plan is to foster him back to health in our home and then to find a great place for him to go. We feel that it’s important to find out what kind of dog he is; how is he around other animals and children, is there any long-term psychological damage, etc. before we would feel good about placing him.