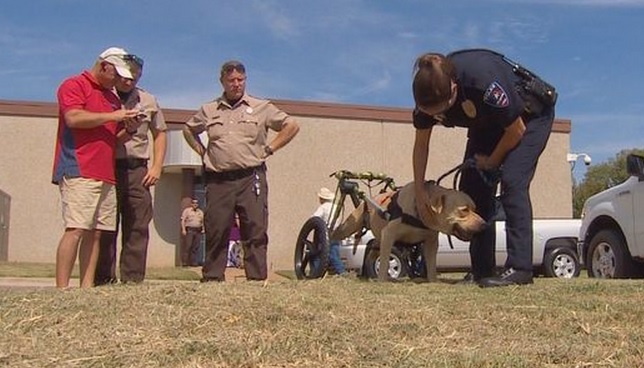 A dog called Saint from Weatherford, Texas is on the mend after being shot and paralyzed.  He was rescued by animal control officers on Wednesday, and put up no fight what so ever during the ordeal.

Saint had been found, tied to a tree in Parker County, Texas this past Friday.  He had no access to any food or water, and had two gunshot wounds that hit his spine, paralyzing his back legs.

After seeing Saint’s story on a local news broadcast, Arlington police officer Stacie Brown just had to respond to the call for help.

“I want(ed) to turn a negative into a positive,” she said.  “I’ve dealt with a lot of hardships myself, through my personal life.”

Brown joined the police force after a drunk driver killed her sister in a motor vehicle collision.  She became a DWI officer, and also has had plans to learn how to properly train dogs for everything from basic manners and behavior, all the way to police and investigation work. 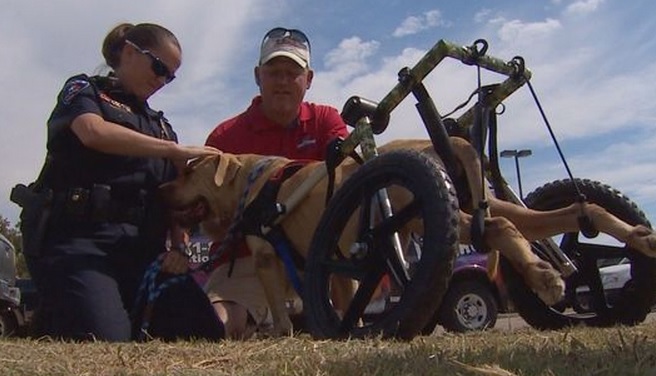 “The lesson of him forgiving,” said Alan Brown of K-9 Direction.  “How quick he forgives people for the hardships he’s had.”

Saint may be willing and ready to forgive the wrongs he’s suffered through, but Parker County Sheriff Larry Fowler is not at all ready for that, himself.  He still is investigating what had happened, and how Saint came to be tied to that tree with the gunshot wounds.

“If we can find the matching gun, needless to say, somebody’s going to jail,” he said to local news sources this past Wednesday.

He also has said that someone has come foreword to assist Saint with the medical expenses for his recovery.  This is provided that the bullets can be dislodged from his spine without doing any further damage to him.  There has also been a $2,000 reward made available to anyone providing information on the case that leads to an arrest and charges are filed.

Both Stacie and Alan Brown are optimistic on their odds for returning Saint back to his good old self.  This time however, they want to make sure that no matter what, Saint is healthy, and well loved and provided for.  Because at the end of the day, all dogs deserve our love, respect and a forever home with a forever family that will take care of him.