On April 7, 2014, firefighter Zach Drews from Duluth, Mich., let Blaze, his pet dog, out in his unfenced yard early in the morning. The young canine was acting strange and Drews realized there was another dog resting near one of his trees, but since there are plenty of friendly strays in the neighborhood, the 24-year-old firefighter didn’t think much of the visiting canine. An hour later the stray had not moved from where Drews had last seen it and that was when the firefighter knew something was wrong. 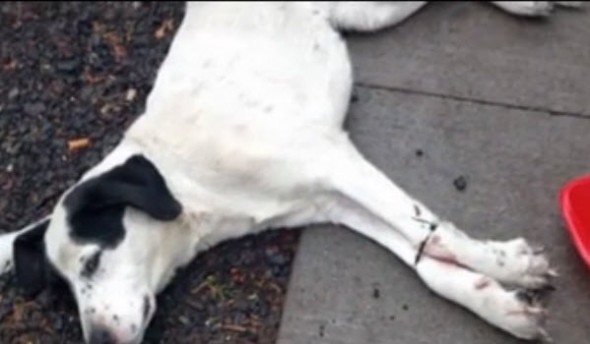 While waiting for Duluth Animal Control to arrive, Drews fed the friendly dog and covered it with a blanket. An animal control officer picked up the abused dog and transferred it to the shelter where the zip tie was cut and the dog’s paws were soaked in antibacterial fluid.

“I don’t know what kind of person would even do that to an animal,” Drews told NBC News.

Drews believes the dog’s hind legs were also tied before the pet reached his backyard, and he thinks this was done with malicious intend. Luckily, the dog sought refuge in Drews yard and thanks to that the pet is now safe and recovering.

A local woman has come forward to claim the pet. She says her pet’s name is Molly and she had been missing for three days, yet Animal Control has not released the pet back to her because an animal abuse investigation is still pending.