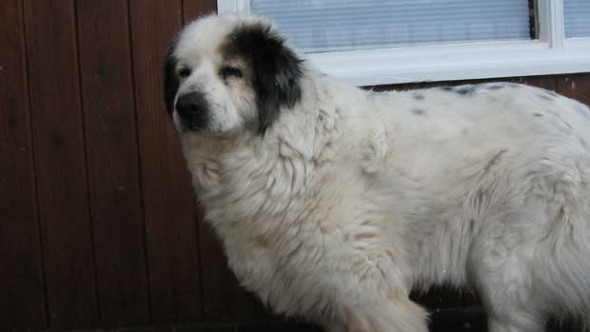 Buddy is one of 64 dogs that was seized from a property in Gull Lake, Manitoba in 2010.  The dogs were neglected, malnourished, and abused and some of them didn’t survive.  Buddy was one of the lucky ones, not only did he survive, his life has taken a turn for the better since he was adopted by Sandi Noble.

When she first saw Buddy he was skin and bones, and was covered in bites from other dogs and rodents.  “He just made your heart break, looking at him. It was sad, he was sad,” said Noble, of Winnipeg.  “Now he’s learning things that he should’ve done when he was a puppy, like playing.”  No one knows how old he is but she thinks he is between 4 and 7 years of age.

Peter Chernecki and his wife were charged and pled guilty to 7 counts of  animal cruelty and will be sentenced on September 17th.  Chernecki claims that he and his wife were trying to help the dogs who he says were strays they found at the local landfill.  The dogs were kept in two buildings with no windows and were never allowed outside.  Of the 64 dogs, 34 had to be euthanized due to illness or behavior problems, and another 7 went to an animal sanctuary in the United States called Dog Town.  The other fortunate souls were adopted out to loving homes, like Buddy’s.

Noble says Buddy will always have some health issues related to the abuse he faced in his prior life.  He is missing some teeth which presents challenges when eating, and he is afraid of confined spaces.  But at the same time, thanks to her love and compassion he has learned to be a puppy again, to play and have fun and be loved.  “It just fills your heart to see him,” she said.  “Even when he decides he’s going to start barking, you know that he’s happy … whereas before, you knew that he was in a really bad place.”