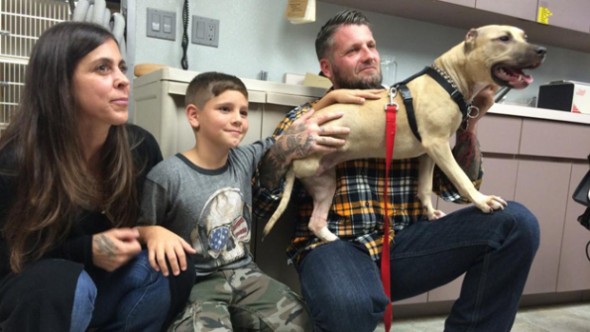 Miss Harper, a pit bull found last this past September horribly abused has finally found the happy ending that she so much deserved.  A loving, forever family has been found for her on Long Island, New York, and she seems to be as happy as a dog ever could be.

The three people implicated in the abuse against Miss Harper were arrested and charged with animal cruelty for what they had done to her.  These terrible people cut her ears off, and also, a back leg.

Miss Harper received care at My Pet’s Vet in Huntington, New York.  When she was put up for adoption, thousands of people applied.  To get her ready, the good folks at My Pet’s Vet tried to fit Miss Harper with a prosthetic leg, but that didn’t seem to really be an option with her according to Donna Kramer.

“With her rambunctious personality, that really didn’t work,” said Kramer in a news interview.

Instead, with wounds healed, she was taught to get around on three legs, and it seems to suit her just fine.

Now, the Roberts family from Bellmore have been chosen to be Miss Harper’s new family, where she will get the love and respect any member of the family deserves.

“We applied and we were fortunate enough to get the phone call,” said Stephen Roberts, Miss Harper’s new human dad.  “She was introduced to our other dog, we have a three-year-old pit bull.  She stayed with us for a few days and everything worked out and then she ended up staying.”

The three accused of abusing Miss Harper are set to appear in court next month.

When asked of those people allegedly involved, Roberts said, “I would like to see them put in jail, which they deserve.  If you could do that to an animal, you’ve got to be heartless.”