A famous Chinese dog meat festival planned for October has been canceled at the urging of animal welfare advocates and protesters.

The Zhejiang Jinhua Dog Meat Festival was to be held on October 18, with over 10,000 dogs expected to be slaughtered in a three day period. Opponents say the festival is nothing but an excuse for the cruel massacre of dogs in preparation for cooking. Prior attendees say the festival is entirely gruesome, with live dogs kept in cages, only to be clubbed to death once selected by a customer. It is said that the air is pierced by the sound of dogs yelping throughout the duration of the festival. 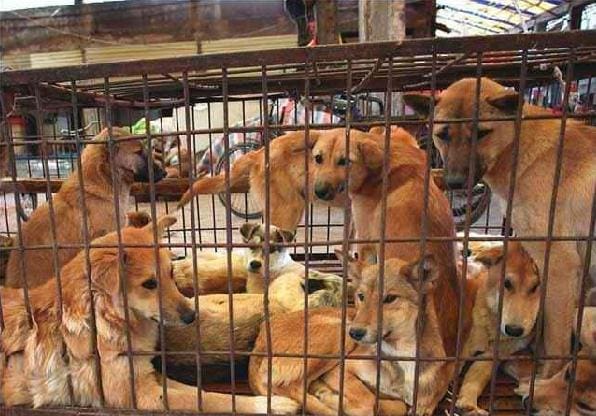 Members of the general public were encouraged to carry out an internet campaign to share to repost information through their blogs and social media, and the online community responded in droves, spreading the word quickly – in fact, just one tweet regarding the festival was retweeted 55,000 times. Authorities in Jinhua took little time to cancel the festival when they were overwhelmed by a massive wave of protest, and animal advocates from around the world are applauding the decision.

The tradition of eating dog dates back to the Ming Dynasty, and the practice remains a source of friction between rural farmers and progressive animal welfare advocates. Activists in Seoul, Korea enjoyed a similar victory earlier this year by causing the cancellation of a famous dog meat festival held by the Korea Dog Farmers’ Association.