A Barrow County, Georgia woman suffered bruises and a shoulder injury when a guard at a local Social Security office tried to throw her out because she had a service dog. Melissa McMann suffers from a degenerative retinal condition that rendered her legally blind. “In places like dark buildings, I virtually have no sight,” McMann told WSBT reporters. 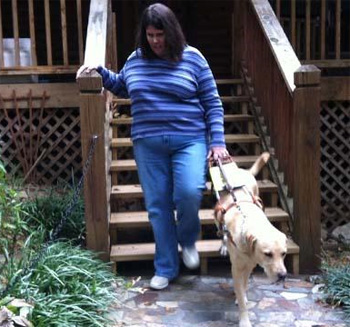 McMann said she commonly answers questions about where service dogs are permitted – which is essentially everywhere the public is allowed.

But on Thursday afternoon, McMann was told she was unwelcome at a Winder Social Security office. She and her husband had intended to complete paperwork for an adopted child when an armed security guard approached them and told them they had to leave because dogs were not permitted in the facility.

The dog was wearing a sign and a guide harness, and the couple made it clear that their service dog was legally allowed to accompany them. The guard demanded that they produce paperwork to prove their case. When they could not, the guard grabbed Melissa and attempted to forcefully remove her from the premises. Her husband had seen enough, and decided it was time to call the police.

An officer arrived shortly thereafter, and the guard, Leroy Huff, admitted to using physical force to try to remove McMann from the premises.  He also agreed that she had offered no resistance, but felt that as a federal officer he did not need to involve the police.

Huff was wrong on both counts. Security guards are not federal officers and must defer to police in such matters. As a result, an arrest warrant has been issued, and Huff faces battery charges in the case. Huff says he plans to turn himself in shortly, but McMann is patient and accommodating, and says she doesn’t think he needs to go to court.

“All that we’re looking for at this point is for the security company that has the contract with Social Security to understand the importance of educating all of the people that work for them as to the laws regarding service dogs and also with regard to not placing their hands on people – you just can’t go placing your hands on people.”