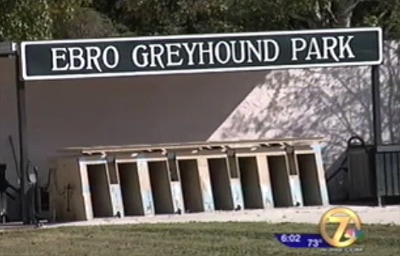 Greyhound trainer Ronnie Williams is being held in the Washington County (FL) Jail on 37 counts of animal cruelty. An inspection of his kennel at the Ebro Greyhound Park led to the discovery of thirty seven starved, dead dogs. Advocates of the breed have voiced tremendous consternation over the incident, and the anti/pro racing debate has been reignited in multiple chat forums, on Facebook and Twitter.

Now there are reports of additional Greyhound corpses that have been found under a bridge only a half mile from Williams’ home. Sunday night, a Walton County Animal Control officer discovered the corpses of at least eight dead greyhounds under the Highway 20 bridge on the Walton County side of the Choctawhatchee river. Ear tattoo registration information has been submitted to the National Greyhound Association. If any of the dogs are identified as having belonged to Williams he will face additional charges.

I don’t wish to break my policy of neutrality, but I do want to say that I think it would be wise for track owners to consider spot inspections for any rented kennels year round. Had such a policy been in place, these dogs may very well have been saved. I’ll step down off of my soapbox now and ask that you consider writing a letter to the prosecutor in the case if this troubles you as much as it does me. I have set aside time today to do so, and I’ll share the following for those with an interest:

A letter writing campaign to the prosecutor, expressing outrage and calling for the maximum penalty, would be helpful. However, it’s important that letters be reasonably worded, short, and to the point. Expressing emotion is fine, but directing anger toward the prosecutor (who is on our side and wants this guy convicted), unleashing anti-racing diatribes, calling for unrealistic penalties, using expletives, etc. are all counter productive to this effort.

Second, Northcoast Greyhound Support is running an auction to benefit GPAEC, for the Ebro dogs:
http://shop.ebay.com/greytstuff/m.html?_nkw=&_armrs=1&_from=&_ipg=50&_sop=1

Additional updates and suggestions will be provided as available. Thank you in advance should you choose to contribute in any way. The dogs may not be able to thank you, but those of us who adore them will be forever in your debt. This is nothing short of a travesty.