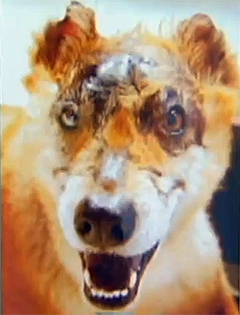 Dr. Doug James was in front of his Alabama home when he heard the screams of a puppy in distress. Moments later, he saw a horrific act that changed his life – and the life of the dog he saved.

James says he’ll never forget that fateful evening when he came upon a group of teen thugs beating a puppy. As he approached them, they set the dog on fire.

“I heard the noise down the street, I heard the little puppy yelping. They were slapping him around, a little three-month-old puppy. Slap, slap, slap. All of a sudden he just burst into flames and I went running down there yelling, I thought how could anybody be that cold blooded,” he said. “He was totally on fire. They had squirted his face with lighter fluid and his whole body was on fire. I said, ‘Did you burn that dog?’ Of course it was obvious that they did, the poor puppy was on fire.”

James and a neighbor extinguished the burning dog after his assailants fled. He rushed the suffering canine to a local vet for treatment.

“I was just thinking the cruelty involved there. This dog is not going to make it through the night, the cold blooded nature of the whole thing. I just couldn’t believe it, he did. The next day he was like my little Marine dog, he just kept on going,” James said.

While it was clear that the abused dog would never look the same again, he was otherwise unharmed, and recovered quickly. When he did, James took him home.

“I rescued him and then I kept him. I kept the dog, and I guest the rest is history,” James added. Gucci and his story of torture and survival inspired change as James started pushing for stronger animal cruelty laws in Alabama. Many were moved by his tale, and James fully believes that Gucci was born with a purpose.

“He was special, you know, because he had been through so much. He was a great human resource, he was a great greeter. I said many a time: if he was human he would be governor. He could just work a crowd. At one stop in north Alabama people waited an hour for him. When he arrived it was like a rock star was there, they cheered him,” James laughed. “It was just so much fun.”

Gucci and James spent the next 16 years together working tirelessly on behalf of animal abuse victims. When he passed away, James had him cremated. To this day, he still misses his companion.

“I had him cremated and he’s in a little cedar box in my hallway, and I give him his good morning and his good night kiss just the way I always did. He was just such a good dog, he was.”