While camping, Dylan Davidson and his friends found a coyote pup on his own.  They brought him aboard their fishing boat, and what they did together is just too cute to be missed!

There wasn’t much info posted on the video’s caption, so naturally people had questions:  “Was the coyote really orphaned?”, “Did you bring it home with you?”, etc.

Though they are canine cousins, coyotes are wild animals, and Dylan knew that the little guy needed to be let go. 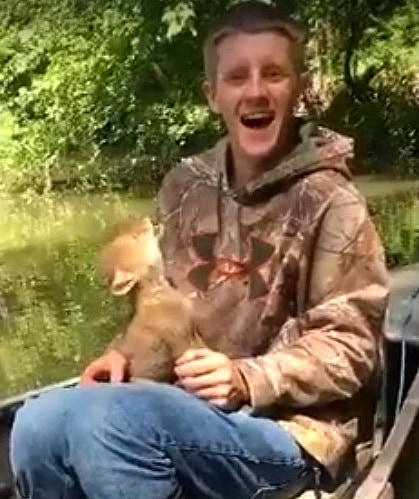 “Yeah, wish I didn’t, but we [were supposed] to camp a night out and I didn’t want to have it howling in the tent and a coyote coming to find it,” he commented.

“It jumped out of the boat and went back to where he found it,” said Tyler Goodale, the man who posted the video.

His time spent with Dylan was sweet while it lasted, but hopefully he was just exploring and made it back to his band.