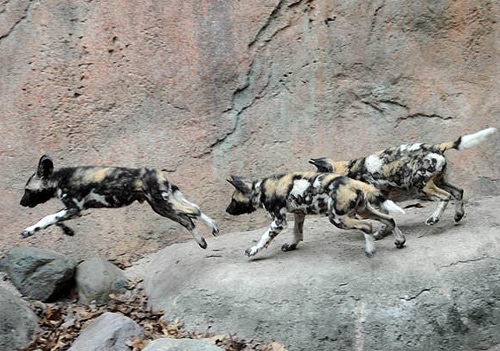 We first introduced you to Brookfield’s pack of African Wild Dog pups in January, just after their first contact with humans. Now they’ve grown stronger and have made their public debut, and as promised, we have a terrific follow-up that gives you a much closer look at this rare, elusive breed.

Six-year-old mother Kim gave birth to six males and four females at the end of November, but the pups were left undisturbed for weeks before undergoing veterinary exams at the beginning of the year. After a few more weeks of quiet time they are finally on the prowl, and are proving quite popular with patrons who can’t get enough of their puppy antics.

As cute as they are, this is not a dog you want to find at the other end of your leash – because as you are about to see, these puppies are absolutely wild.