A litter of young African wild dogs at the Cincinnati Zoo recently had their first trip outside.  See how cute they are as they explore and romp around!

African wild dogs, also called painted dogs and Cape hunting dogs, are an endangered species that live in the plains of sub-Saharan Africa.  They are extremely social and live in families with separate female and male hierarchies.  Only the dominant pair are allowed to mate. 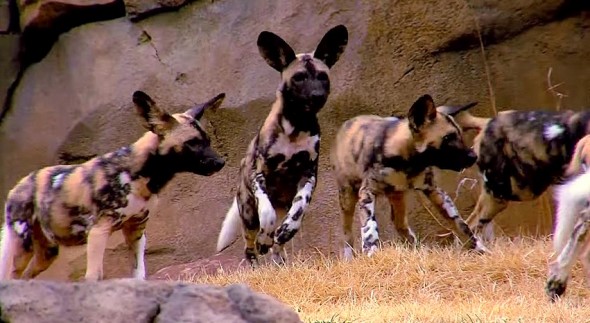 These dogs are one of the oldest species in the Canidae family.  They’re the beefiest African canid, and are hypercarnivores, meaning that their diet consists of over 70 percent meant.  Their coloration wildly varies.  They have no undercoat and lose fur as they age.  The oldest dogs are nearly bald.

African wild dogs have huge territories of about 930 square miles per pack.  This is double the size of New York City!  They are cooperative hunters and allow the pups to eat first, even before the alphas.  They are very intelligent and love playing, and even have special pre-hunting rituals that are akin to a pep talk and cheer before a big game.