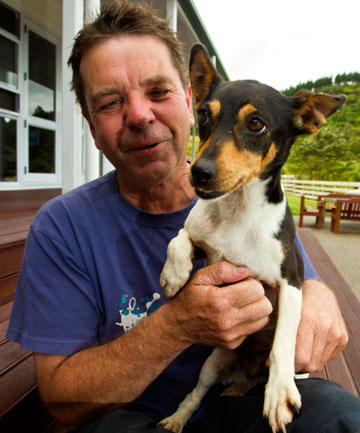 A fox terrier that had been missing for 22 days is back home and her owners are thrilled.  On December 7th, Jazz heard gunshots and thunder, and she bolted.  Her owner, Dale Norquay, had searched high and low, placing fliers all over the town of Ngaruawahia and going out every evening for 3 weeks in an attempt to find her, to no avail.  “She just took off and didn’t come home,” she said.

She had all but given up hope thinking that a small dog that normally spent a lot of time indoors snuggling with her family, would never survive that amount of time outside on her own.  But late one night, after a feeding her granddaughter, she looked out the window and could not believe her eyes.  “I saw this white dog in the window and I thought I was dreaming.”

After many nights away, it is a mystery how she survived and one can only guess what she was up to, but she was in good spirits and other than being pretty smelly she was in good health.  “Twenty-two nights away from home, so she’s been living on something,” said Phillip Norquay, Dale’s husband, who then immediately bathed her.

“We thought that she was probably history . . . but she showed up at midnight (on Saturday) absolutely stinking, so it was straight into the shower,” he said. “She looks like she could do with a good feed.”  It’s one of those times when you wish a dog could talk so they could tell you where they’d been, but perhaps it is better not to know and just be happy they are home safe.