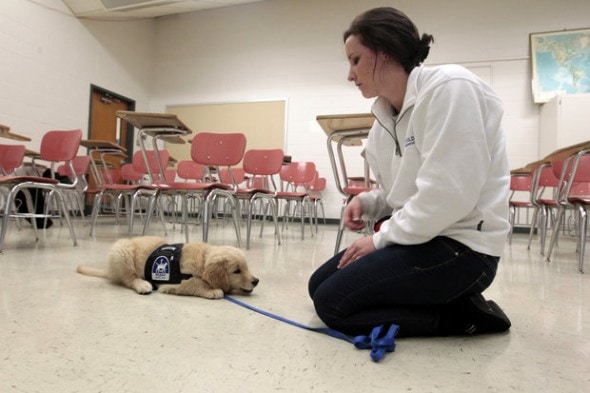 The administration agreed and Wildcat Service Dogs was founded. Currently six student trainers work with service dogs and another twenty students assist the program by being puppy-sitters. It’s a big commitment for students to train these dogs. The puppies spend up to two years with their trainer before being placed with a patient. Before a student receives a puppy they must go through a rigorous selection and basic training process. The trainers are also required to attend weekly training sessions and write weekly progress reports.

Currently, Skarvan is working with a golden retriever puppy named Chevy.  Chevy draws a lot of attention on campus, but because he is being trained to be a service dog students have to hold back the urge to cuddle him. “You can pet him as long as he’s sitting or lying down,” said Skarvan.

After spending over a year with their trainers the puppies then go on to help the sick or disabled. Skarvan had a hard time saying goodbye to her previous trainee Graham, who is now helping a woman with mobility assistance. Skarvan has already become very attached to Chevy. She says saying goodbye to the dogs they train is the hardest part for the student trainers.

The program doesn’t just help train dogs that will benefit those in need, it benefits the students at Kentucky as well. “This is not just about the mundane process of training a service animal that will later benefit someone who has a disability,” said Professor Roger Brown, sponsor of Wildcat Service Dogs. “The major portion is to educate people about the importance of service animals and how they get trained, that’s that are that has the most positive effects on students.”