After 6 years of service, Doc is abandoned in his time of need 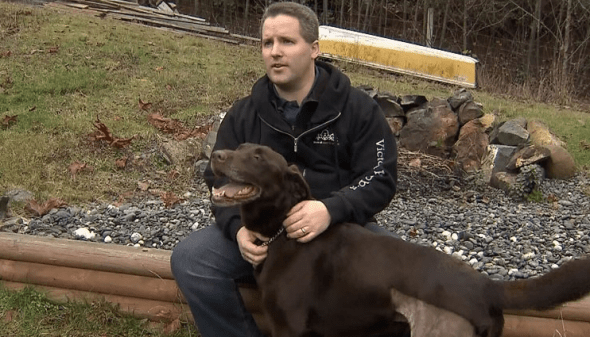 A dog that devoted his life to public service has been shunned in his time of need, and many say it is a disgrace.  Doc, a chocolate lab that has worked as a gun and drug sniffer for Corrections Canada for most of his life was injured on the job and needed knee surgery to repair damaged ligaments.  When Corrections Canada refused to foot the bill for his treatment, Doc was taken in by a rescue group who took it upon themselves to look after him.

Victoria Adoptables Dog Rescue, a Victoria-based non profit that rescues abandoned dogs came to Doc’s rescue, even though he was not technically abandoned and his “owner” was very much able to pay the bill.  Traditionally, all working and service dogs care is paid for while they are working and even when they are about to retire, but for some reason Corrections Canada made the decision not to support Doc’s care.

Teak, a Vancouver Police service dog who was stabbed by an assailant in mid-January, had his bills paid by the VPD before he was retired.  This is standard treatment for guide dogs as well, says B.C. Guide Dogs CEO Bill Thornton.  “These dogs are serving humanity and working for us and performing an important function,” he said. “They should be cared for.”

Victoria Adoptables did their own fundraising to cover the surgery for Doc, but Devin Meads, who is the 6 year old lab’s foster parent thinks the CSC’s actions are terrible.  “I don’t think that’s fair that you hurt yourself and that’s it, game over?” said Meads.  The CSC has since agreed to step up and pay the entire bill, but it is a mystery why they refused in the first place. “CSC is examining this incident to learn how the dog’s case was handled, and to ensure that the appropriate process will be followed for any future incidents of dog injury,” spokesman Jean Paul Lorieau wrote.

Doc, unaware of all the controversy about his care, is happily recovering in his foster home and will be ready to be adopted in a few weeks.  Anyone interested in information about adopting him can contact Victoria Adoptables.