A stray pit bull has been found with multiple gunshot wounds in Westport, Mass and authorities want to know who is responsible.  The dog has been named Liam, and he is currently being treated for his injuries.  An animal control officer had been tracking the stray dog for several weeks, and was horrified to discover him clinging to life last Thursday.  She immediately took him to a nearby animal hospital, saving his life. 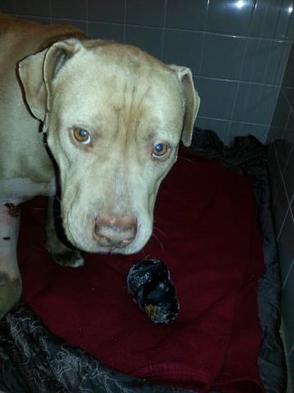 Once Liam recovers and is released from hospital he will be taken in by Handsome Dan’s Rescue and Heather Gutshall, founder of the the organization will place him in a foster home until the right forever home is found for him.  Gutshall said, “Right now we are going to be opening a cruelty investigation, with the Rhode Island SPCA and the MSPCA to find out if we can find out who shot the dog. We also need donations for his medical treatment.”

Handsome Dan’s Rescue,  which is fully supported by volunteers and donations takes on very challenging animal cases, like ‘Jules’ a Pit Bull from Providence who needed a hip replacement.  “That’s not the type of thing that generally municipal animal controls can cover, so our organization, Handsome Dan’s Rescue takes in Put Bull- type dogs. We focus on local shelters that aren’t candidates for adoption due to medical and behavioral reasons,” Gutshall said.

Without Handsome Dan’s, many of those dogs would be euthanized.  Instead, dogs like Liam are given a second chance in a loving home well suited for them. Anyone who wishes to make a donation to help out Liam and other dogs like him go to Handsome Dan’s Rescue Facebook page.  Donations have been pouring in but there are always more dogs like Liam who need help.  Fortunately his story will have a happy ending and hopefully he will forget the terrible things that have happened to him.

Anyone with any information about who may have shot Liam is asked to call Westport Police in Massachusetts.