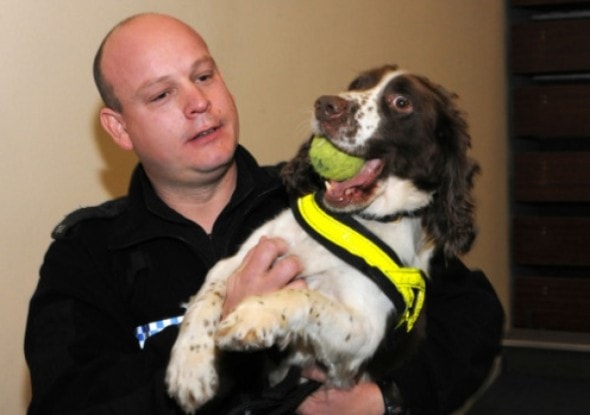 With the change of seasons comes a change of lifestyle for Ted, a police dog in the Bedfordshire and Hertfordshire Dog Unit.  After a nearly 9 year career sniffing out firearms and drugs he will be living a life of leisure in the Sawtry countryside where he will enjoy a well-earned rest.

PC Jason Keir has been Ted’s handler and constant companion since 2004, said: “Ted is a real personality and an excellent police dog. Over the years he has found firearms and large amounts of drugs and cash and helped lock criminals up to keep the public safe.”  Ted was a given to the department as a gift and has been known for his performances at media events and his presence on the force facebook page.

Ted has had his share of stress, having undergone 2 surgeries to have knee ligaments repaired.  Normally that would force a dog into early retirement however his recovery was so quick and smooth that he managed to devote another 2 years of  his life to protecting his community.  Despite the big changes, Ted has adjusted well to his new role as retiree, having more time to play with tennis balls and collect rotten apples from the garden of his new family.

Of course Keir feels Ted’s absence, “After having Ted for nearly nine years I do miss him and so do my children but I know he is having a nice life being spoilt, sleeping on a sofa and living indoors for the first time.”  Dogs like Ted devote their lives to protecting us, and deserve to live out their senior years in comfort and luxury, and so he shall.