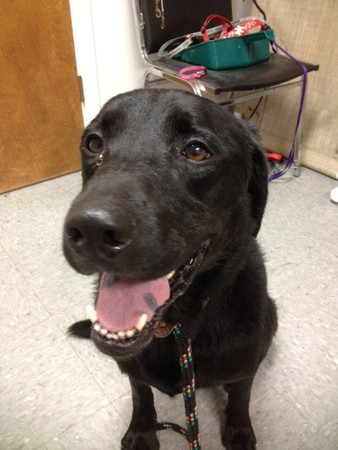 When employees at Luke’s Donut Shop in Avon, Connecticut came to open up at 4 a.m. on Friday they found a nine-year old black lab named Molly devouring doughnuts. Molly went missing from her owner Betsy Vanloon almost four weeks ago. Vanloon, who had adopted Molly only six months ago, had been taking Molly to the veterinarian for an appointment last month when Molly took off from the parking lot.

There had been several Molly sightings in the area over the past couple weeks, but no one was able to get close enough to catch her. Animal Control officer Beverly LaPlume helped search the area for Molly. When searching for animals LaPlume also tries to identify all possible food sources that the animal may return to. In this case Molly seemed to be a fan of Luke’s Donuts. A woman who takes the leftover doughnuts to a homeless shelter had seen Molly hanging around outside the doughnut shop.

Co-owner of Luke’s Donuts, Sam Kassim, worked with a Public Works employee to help set up a doughnut trap for Molly. Kassim put a few doughnuts in the trap as bait. On Friday morning Kassim was happy to see that the trap had worked and quickly called LaPlume, “Bev! Dog in trap!” he alerted her. LaPlume rushed over to retrieve Molly and take her to the veterinarian. A check up with the vet revealed that Molly had lost about 20 pounds but was otherwise healthy. Molly and her owner Vanloon were reunited once again by 7:30 am. “She was ecstatic. It was nice,” LaPlume said of Vanloon, who was in tears over being reunited with her dog.